Last night, I stopped paying attention to the news when I heard, early in the returns, that Doug Jones was far behind Roy Moore in the Alabama election.

The last thing I read about it was Charles Pierce’s despairing description of a Moore rally.

You grow exhausted from the effort it takes to keep mockery at bay long enough to explain that what Moore and Bannon are selling is a dangerous blend of religious extremism and McCarthyite bombast, Roy Cohn in Torquemada drag. You grow exhausted by the effort it takes, over and over again, to remind yourself that there are good people in the crowd cheering this river of sludge and nonsense.

Finally, you give up. Roy Moore is a vehicle for collecting suckers, for liberating them from their responsibility as citizens in a self-governing republic, and anybody who thinks this waterheaded theocrat belongs in the United States Senate is a dupe and a fool. Finally, you don’t care if the people behind Roy Moore, and the people in the crowd in front of him, believe you are a member of the coastal elite or an agent of Lucifer. Finally, you grow weary of the smug condescension of religious bigots. Finally, you decide to put down the twin burdens of excusing deliberate ignorance and respecting the opinions of people who want to light the world on fire to kill their imaginary enemies. And you give up and tell the truth.

These people deserve what they get.

Then I went to bed.

I woke up to howling winds rattling the house, and I peeked out the window to see a bleak cold landscape to match my soul. So I resignedly opened up the news to this, Rosie Gray’s post-election wrap up.

Everything had to break exactly right for Doug Jones to win the Senate election in deep-red Alabama, and it did. Jones ran a disciplined campaign that hinged on black turnout, and it delivered for him.

WTF? Jones won? How could that happen? Moore had Bannon and Clarke and Gohmert and Trump all backing him — he had all the racist/nationalist/dumbshit fuckwits pulling for him in Alabama. That isn’t a recipe for success anymore? And then I read how Jones won. He had the black vote. Black citizens turned out in spite of all the obstacles put in front of them, all the voter suppression, all the dirty tricks, like all the stories I read of Alabama cops pulling over black drivers on the way to the polls to make them late, the weird games with demanding that they re-register, that they were listed as ‘inactive voters’ and had to jump through extra hoops to get the ballot. The white vote strongly favored Moore. Heck, the college-educated white demographic voted for the kiddie-diddling theocratic incompetent whose wife argued that he couldn’t be a racist because one of his attorneys was a Jew. He totally won the Bubba vote. This guy. 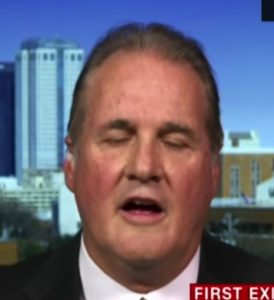 The white people of Alabama voted for the worst candidate…because he was white. If you want to complain about “identity politics”, fine, just keep in mind that the worst perpetrators are those fine light-skinned people of European descent that the neo-Nazis want to build an “ethnostate” for — the great white fuckups of America.

And then I read that the state of Texas might be in play in the near future — that Republicans are facing a lot of competition and a lot of state races are going to be contested. Why? Shifting demographics as the Hispanic vote in Texas rises.

Brown Texas is going to save us.

The Republicans are playing against time, and have gambled everything against an inevitability — the US is going to become a majority minority nation within a generation, an environment in which bigotry will no longer be a viable political position. Further, the one white demographic that opposes the Republican status quo are the young people. It’s a rising tide that’s going to destroy the current conservative dominance. The only question is whether the Republicans will succeed in wrecking the nation before we bury them.

Oh, gosh, I made the Morris North Star! » « A grateful and appreciative video