Rebecca Steele was 13 years old when she started her math workbook in 1702. We still have the book, and it’s amazing! 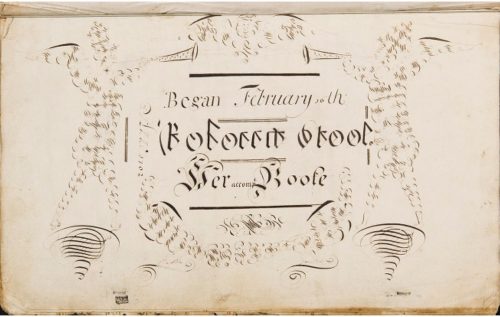 Manuscript mathematical cipher book written in 1701 and 1702 by Rebecca Steele, a young student in Bristol. Pages exemplifying specific mathematical operations and concepts are embellished with calligraphic designs and command-of-hand drawings, and some lessons are dated. Many processes and operations are described in long word problems, including one (p. 30) where Steele is set the problem of figuring her exact age. She gives her birthdate as 28 May 1689 at 8:12pm and the present date as 17 April 1702 at “about 10 in ye morning.” She is likely the Rebecka Steele who appears in Quaker birth records for the city of Bristol as a daughter of William and Melior Steele, born on 28 May 1689 in Thomas Street.

Browse through it online, and you might be astonished. Thirteen year olds nowadays don’t generally have the ability to produce work like it. It’s a math book, but it mostly seems like an exercise book in calligraphy — I imagine that in the early 18th century much of the practice of teaching had to be taken up with mastering the art of quill and brush and ink, and that even when working on something as basic as multiplication tables, there was all this ancillary effort required required to put it on the page, and that there was a great deal of social reward for doing it artfully.

That got me thinking about the Flynn effect, too. Was Rebecca Steel less intelligent than your typical 21st century 13 year old? I rather doubt it. You ought to be impressed at what she was doing in her work book, even if the math seems trivial. But what she was doing was exercising a collection of important skills that wouldn’t make the grade in the standardized tests of today.

It also says something about the enabling effect of the progression of technology. We can pick up a ballpoint pen or a pencil and make marks on plentifully available perfectly white paper, without having to even think about the tech that makes it all possible. There was a time when writing was a complex skill that required an appreciation of the physical properties of ink, of the shape of your pen nib, of the texture of the paper. I’d be utterly confused if someone handed me a bottle of ink and a goose feather, and if I had to write a short note it would be a blotchy mess, and my hands would be smudged black.

I salute you, Rebecca! I wonder what happened to her?

Roald Dahl actually was an awful human being » « Hooray for random mail deliveries!