I got into a conversation with a creationist in a hangout late one night, and now, wouldn’t you know it, he has announced that he “humbled” me. Funny, that’s not how I remember it. He cut up a few bits from our discussion and created a video in which he thinks he has rebutted me, with much bluster and arrogance.

PZ Myer just got owned! all the down votes are from butt hurt atheists who worship PZ Myers and want to protect their religion called evolution!

In case you don’t want to sit through 13 minutes of ranting, I’ll summarize it for you.

The first is that he said something bizarre — that humans have 43 chromosomes, while tobacco has 48, and that this is a fact that evolutionists use to argue for evolution, calling it the chromosome argument which, he says, 40 or 50 atheists use.

My reply was that chromosome number is irrelevant. After all, it varies in a rather arbitrary fashion across species, and it seems to be a highly variable character. While it may be useable as a comparision across closely related species, just tallying up chromosome numbers gives you no clue to relatedness. Here’s a table of some representative numbers, for instance: 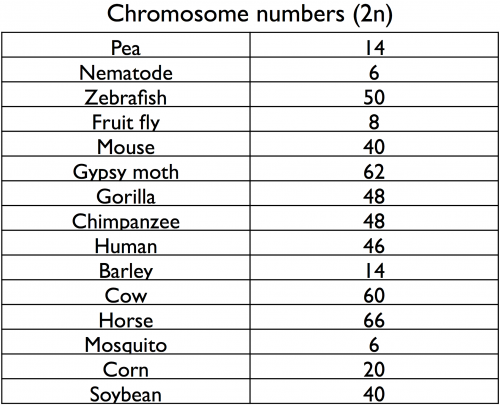 If you just thought those numbers were sufficient to indicate ancestry, you’d have to conclude that humans are more closely related to zebrafish than they are to horses. So, no, we don’t use the chromosome argument, or the argument from chromosome numbers.

I asked him if he knew how many chromosomes he had. His answer: 43 or 45. Both wrong. Not just wrong in detail, but in concept — we’re diploid, so we’re going to have an even number of chromosomes.

In his rebuttal, he mangles the statement that chromosome numbers are not a good metric for relatedness into a claim that no evolutionist uses chromosomes as evidence for evolution. Then he shows a clip of Ken Miller dismantling a common creationist claim, that because the other apes have 48 chromosomes and we only have 46, we can’t be that closely related. Miller shows from the content of chromosome 2 in humans that it is a product of a fusion of two ancestral chromosomes. He is explaining how chromosome numbers can vary.

Then he cuts to Kent Hovind. It’s Hovind who thinks these numbers are significant. He shows slides of chromosome numbers like the one I posted above, and makes strange arguments. Chimps have the same number of chromosomes as tobacco, which for some reason the audience finds hilarious and guffaws loudly.

It’s creationists like Kent Hovind who use this bogus chromosome argument, not biologists. Our creationist then summarizes by saying he was not demonstrating his ignorance, he knows what he’s talking about. Sorry, guy, you’ve only demonstrated that you’re as ignorant as Kent Hovind. Do better.

He says the second stupid thing I said was to cite the fossil record.

Actually, what I did say was that there were multiple lines of evidence and that I thought the molecular evidence was most persuasive, but he had a canned rant about how he doesn’t believe in fossils, so he latched onto that.

Here in this rebuttal he then cuts to an ancient clip from Dick Weisenberg (I knew him; he was a colleague at Temple University) from the 1990s (ancient history — look, he’s using an overhead projector!). What this has to do with me, I don’t know, especially since I disagree with a few of the things he says. But what seems to have caught his attention was that Dick was caught in a contradiction: he first tells the audience of creationists to look at the fossil evidence, that the bones “prove” evolution, and then later he dials it down and says that the fossils are consistent with evolution. I agree with the latter, not the former. It’s one of the difficult things about doing debates when you’re not a trained debater — it’s easy to get tripped up by the colloquialisms and casual conversational use of words.

But the thing is, pointing out someone else’s error does not address anything I said. It also doesn’t rebut the fact that the fossil record is consistent with the theory of evolution, but not with creationism.

He lectures me at the end about my arrogance and how I should have more humility when dealing with Christians.

My time is very important to me, and I don’t like wasting it on people who don’t know what they’re talking about.

We Hunted the Megalodon » « Only one problem?