Since David Futrelle is currently offline, dealing with some nasty migraines, I guess I have to step in and cover the incel beat. Incels, for those blessedly ignorant of them, are “involuntary celibates”, sad deprived people who can’t get a woman to touch their penises, and who then blame all of womankind for their selfish unwillingness to have sex with them. They also tend to aggregate in places like r/incel where they indulge in increasingly vicious rounds of reinforcement of inappropriate blaming. It gets ugly.

Anyway, here’s an example of bad biology and misogyny from an incel. 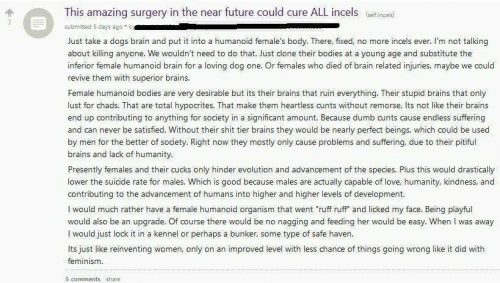 OK, forget the bad biology — that’s irrelevant in the context of this person’s contemptible beliefs about women.

Without their shit tier brains they would be nearly perfect beings, which could be used by men for the better of society.

Yeah, ladies, if you were smarter men could use you, so we’re going to pith you so men can use your bodies. It’s all about using you.

Hey, I’m sort of understanding how Futrelle could feel bad after concentrated doses of reading this crap, but my discomfort seems lower down, somewhere in some heaving guts.

How do we end this bullshit? I think it’s safe to say that reddit makes it worse by allowing these people to clump into self-reinforcing clans suffering from self-fulfilling prophecies. Maybe reddit should take some responsibility and shut down wildly demented hate groups? Nah. Free speech uber alles!