This is a bit of an own goal, sent to me by the Islamic creationist, Harun Yahya. 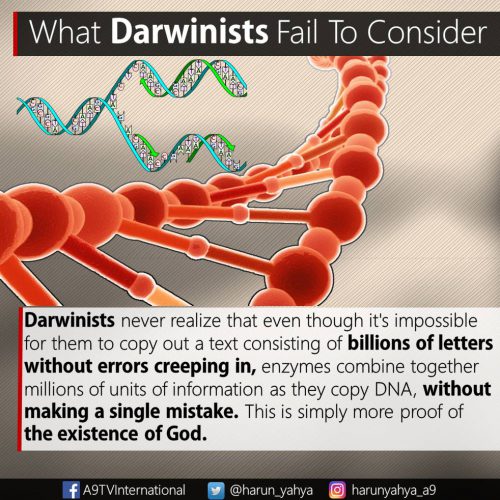 Darwinists never realize that even though it’s impossible for them to copy out a text consisting of billions of letters without errors creeping in, enzymes combine together millions of units of information as they copy DNA, without making a single mistake. This is simply more proof of the existence of God.

Except that DNA polymerase, the enzyme that copies DNA, makes errors at a rate of about 10-8 mistakes per base pair (error correction processes bring that down to about 10-10 errors per base pair). Whoops. God makes mistakes! Also, while the DNA in the background of the image is correctly exhibiting a right-handed twist, the large orangeish fragment in the foreground seems to have a left-handed coil, in addition to being drawn with a strange and incorrect stick-and-ball arrangement. Tsk, tsk. Wrong and inconsistent. Does he really think this kind of crap will persuade a biologist? Why is he sending it to me?

Although, to be fair, I don’t think most people think chemistry has to be flawless to be compatible with gods, and obviously evolution depends on variation produced by errors, so this whole line of argument is irrelevant.

How did you celebrate Trump’s 100 days in office? » « Musk and Trump belong together