Steve King, who is definitely one of the dumbest politicians in America, put his foot in his mouth once again. He is endorsing openly racist ideas, making David Duke happy, and confirming once again that the Republican party has become the shit-hole where we dump our very worst people.

King in a tweet praised Geert Wilders, including a cartoon depicting Wilders plugging a hole in a wall that reads Western civilization.

Wilders understands that culture and demographics are our destiny. We can’t restore our civilization with somebody else’s babies, the congressman wrote.

Actually, yes you can. In fact, you must. Our country alone contains over 300 million people, is Steve King planning to fill the nation with the fruit of his loins? Obviously not. When he says our civilization, he has a broader group of people in mind than just his immediate family. When he says somebody else’s babies, he’s explicitly making a division among the people living here to exclude a group. The question is, where is he drawing the line within our people?

I think we can all guess. And it’s understood that somebody else’s babies are quite simply the brown people who don’t look like him.

There’s a word I like: ecumene. It recognizes that there is a broader community of people living in a land, bound together by the ties of our culture, but still allowing for diversity. I don’t like people who want to shatter our ecumene.

It’s a clear message, King said on Monday. We need to get our birth rates up or Europe will be entirely transformed within a half century or a little more. And Geert Wilders knows that and that’s part of his campaign and part of his agenda.

Guess what, Steve King? Our countries are going to be transformed whether you like it or not, and whether one ethnic group or another has greater birth rates. People gripe about different generations within a population, and always have. Cultures change, always. It’s human nature. The concern is to shape those changes in positive directions. One example of that is public education, which Steve King’s party wants to destroy.

Also, our birth rates? Whose? Is Steve King a resident of the Netherlands? Perhaps he thinks he’s being inclusive. I warn you, though: allow Iowans to find commonality with the Nederlanders, and next thing you know, you’re going to have to let Belgians into the club. And if you let Belgians in, you’re going to have to recognize your affinity to the French. From there it’s a slippery slope to Iowans becoming cosmopolitan people of the world, and there goes your dream of redneck insularity.

King went on to criticize illegal immigration to the United States and immigrants who don’t assimilate into the American culture.

I’m in a state where you can buy lefse and lutefisk any day of the year, where communities celebrate Syttende Mai, where individuals proudly fly blue and yellow flags, where we tell Ole and Lena jokes. Is that OK, Steve King? I notice that you have a motley assortment of flags on your desk, including a Traitor’s Flag. 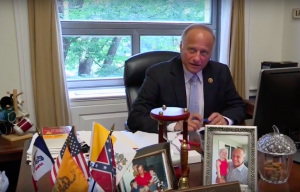 I think that it is fine to be proud of your heritage, and people should celebrate the customs of their Latin American or African or European or Asian ancestors. It’s when it becomes exclusionary, and you try to shame people for their history, or you use your history to justify oppression, that it becomes a problem.

Living in enclaves, refusing to assimilate into the American culture and civilization. Some embrace it, yes. But many are two and three generations living in enclaves that are pushing back now and resisting against the assimilation, he said.

Like, say, Minnesota? My family came over from Sweden and Norway in the early 19th century, it’s been like five generations, and they haven’t forgotten old customs. My grandparents even moved again from Minnesota to Washington state and found communities of like-minded Scandinavians to live among! Yet somehow second-generation citizens who speak English at school and still speak Spanish to their abuelita are a problem?

How much assimilation do you want?

So why does Steve King want to make changes that turn us into an inferior civilization?

I’d like to see an America that’s just so homogenous that we look a lot the same, from that perspective, he said.