We’ve got a problem brewing here in idyllic Morris, Minnesota: one of our faculty, Dan Demetriou, has made racist comments that became widely known among everyone here, and are now getting aired on Inside Higher Ed.

In what seems like the latest installment of the academe edition of the post-Trump culture wars, students and faculty members at the University of Minnesota at Morris are planning a teach-in Monday, following a professor’s harsh criticism of immigrants and refugees on social media. The professor says he wrote about an issue of concern on a private Facebook page and is being punished for being out of step with the politics of his colleagues.

“Illegal immigrants lower the confidence in the rule of law and add people and workers and students we don’t need,” Dan Demetriou, associate professor of philosophy, recently wrote on Facebook, according to screenshots that have been made public. “They on average have IQs lower than natives and low skills. They are harmful to an economy about to automate, especially when it is a welfare state.”

Refugees, meanwhile, are “way worse,” Demetriou wrote, “as most adhere to a religious-political cult with repulsive values at war with the West from its inception. No country who has taken the current crop of refugees has made it work.”

He isn’t being “punished” in any way, as far as I can tell. He is being criticized in a far more civil way than he criticized a significant fraction of our student body. He’s currently on sabbatical in Sweden (!), which sounds like a pretty sweet ‘punishment’ to me, especially since next year was supposed to be my sabbatical year, and I’ve been asked to delay it.

He is no claiming that he is being persecuted by left-wing “feelings”.

Maybe you can imagine being me, hearing most of my colleagues advocate for policies that, as far as I can tell, are failing spectacularly overseas and in many communities at home. No one much cares for how their expressions may discourage, alienate, frustrate or sadden someone who, like me, sincerely believes that his children — our children — will be put in grave risk by leftist immigration policies. Nor should they care, because my feelings don’t determine facts. That someone is upset by a claim is wholly irrelevant to its truth.

Facts matter. What he doesn’t seem to appreciate is how badly out of alignment with the truth his original comments are. He’s being criticized, not because of his political alignment, but because he is wrong.

We teach young people who are immigrants, or children of immigrants, and several of our faculty are immigrants. They are just as intelligent as our white students whose families have been here for several generations. It’s also jarring to see a faculty member from a campus with a significant enrollment of Indian students to use the term “natives” — I don’t think he’s comparing our Somali students to our Lakota students. He’s got a peculiarly privileged understanding of “native”.

IQ is particularly problematic in this context. IQ scores were invented as a rationale for immigration quotas — they are inherently biased. To accuse someone who speaks a couple of languages, who had the ambition and strength to escaped an oppressive situation, and who is now working hard to establish themselves as citizens of a new country, of being unintelligent is simply absurd. People who can rise up out of such difficult circumstances should be welcomed and recognized for the contributions they can make. It’s easy to have the leisure to study and be comfortable in the conventions of the culture you’ve been brought up in, to do well on an IQ test; it’s remarkable when you’ve been on the run from tyrants who want to kill you, or from a rain of American-made bombs, that you can then adapt and thrive to new opportunities.

Of course, that’s what humans do.

I’d like to know where Dan thinks the cutoff for percentage of refugees enrolled makes for a bad school. Is UMM such a school? We tend to praise our university for its diversity relative to other Minnesota colleges (while also regretting that it isn’t higher). Does he think our “foreign” students degrade the quality of the education offered here?

As for failing to make absorption of refugees work in all countries…he’s in Sweden. Sweden is in the news because of similarly ignorant comments made by our president. There’s a lot of information available on immigrants to Sweden. It wrecks his claims.

Immigrant rates have grown even further in recent years, owing in large part to the global refugee crisis. In 2014, Sweden admitted more asylum seekers, per capita, than any other country on Earth. Many Swedish immigrants today hail from war-torn Muslim-majority countries like Syria, Afghanistan, and Iraq. 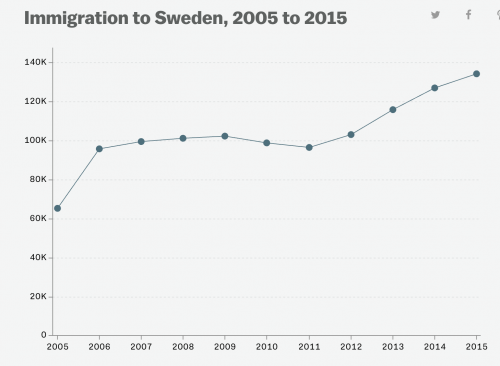 However, there’s no evidence of a massive crime wave. Here is an official Swedish government tally of the rates of six different types of crime directed at persons — fraud, assault, threats, harassment, sexual violence, and mugging. (Homicide is excluded because the rate is tiny; in 2014, there were 87 murders in the entire country of roughly 10 million.) 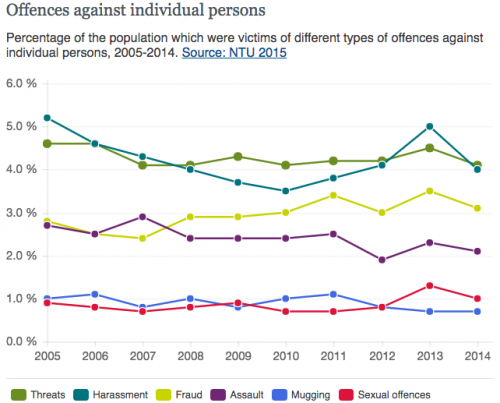 As you can see, there is no significant uptick in any of the crime categories alongside the rise in immigration. The most recent official report available in English, covering 2015, is not incorporated into that chart — but it concludes that the rates of these crimes are at “approximately the same level as in 2005.” That’s a slight increase over the 2014 rate, but hardly evidence of a crime wave — let alone one committed by migrants or refugees.

Demetriou is a professor of philosophy. He doesn’t seem to know much at all about sociology or history or biology, but he’s quick to declare himself the victim of a political witch-hunt by people who don’t care for his ‘truth’. He’s the son of Greek immigrants, so maybe it’s a problem with his IQ?

I’m in agreement with our chancellor’s statement on this incident.

It has recently come to my attention that messages have been circulating that include comments perceived of as disrespectful, disparaging, and directed at other community members. While democracy should and does rightfully tolerate expression of differences of opinion, some members of our community have found these communications both personally and professionally distressing.

I want to strongly reaffirm our mission and values as a University community and in particular, Morris’ campus vision that we celebrate and support the multicultural and international inclusiveness of our community. Differences are our strength, and our community values and respects diversity of all kinds.

We no doubt will continue to have differences of opinion and perspective. At the same time it is imperative that we all make every effort to express these differences in a respectful way.

As a model for civil discourse, I offer the University of Minnesota Board of Regents Guiding Principles which provide timely and sage advice whether members of our University community are acting as individuals or representatives of UMM:

“In all of its activities, the University strives to sustain an open exchange of ideas in an environment that:

• embodies the values of academic freedom, responsibility, integrity, and cooperation;
• provides an atmosphere of mutual respect, free from racism, sexism, and other forms of prejudice and intolerance;
• assists individuals, institutions, and communities in responding to a continuously changing world;
• is conscious of and responsive to the needs of the many communities it is committed to serving;
• creates and supports partnerships within the University, with other educational systems and institutions, and with communities to achieve common goals; and
• inspires, sets high expectations for, and empowers the individuals within its community.”

I look forward to working with you all as we productively and constructively address the issues of the day on our campus.

Now, though, is the time for Demetriou to strike back. I’m sure he’s going to be popular with reporters from Breitbart, InfoWars, and the Daily Mail. I wish him luck with his new celebrity.