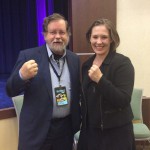 I’m back from Skepticon, and I’m feeling good. This is the most relaxing conference around for me — it’s a gathering of non-believers, but of non-abrasive, open-minded non-believers who also think there’s a heck of a lot more to being an atheist than expunging “god” from our coinage. It was all good, but here are my favorite events:

There was lots of other good stuff: Rebecca Watson made a triumphant return to the stage, there were lots of conversations about the state of secular activism, there was a taco truck parked outside, and of course lots of happy socializing. I also had to miss the entire last day — I had to fly back and get ready to teach this morning — so I didn’t get to see Jerry DeWitt or Debbie Goddard or the other people who finished up the conference with a bang.

We are so screwed » « Hey, gang, I’m in Springfield