I was following @upulie on Twitter, when I saw that she was using this app, Periscope, to give a demo of what she does in the lab. Hey, I thought, I could do that, so I tried it, and gave a tour of my cheapass zebrafish facility (you don’t need the app to watch it). This is not my fish facility. 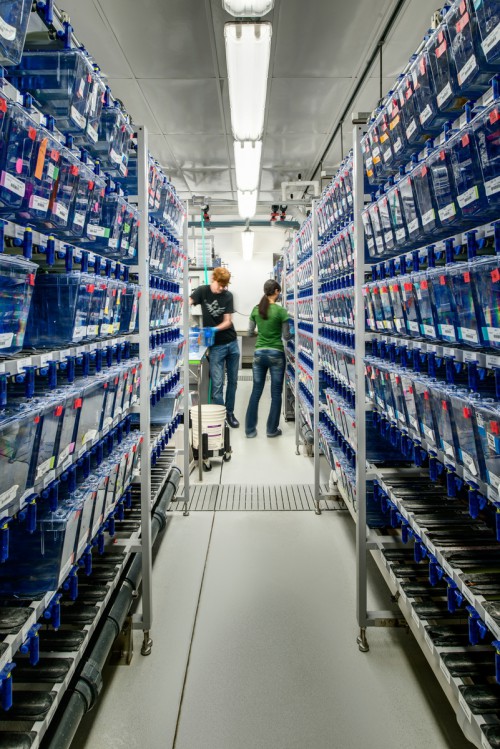 That’s the big boys’ and girls’ system at the University of Oregon. So be warned: I just have a single small rack with 8 populated tanks. Also, it’s got nonstop water gurgling and bubbling, so it’s hard to hear me over the pleasant, soothing sounds. My students and I built it out of a plastic rack from Lowe’s, a bunch of PVC pipe, some hydroponics widgets, a big pump, and a cow trough. Our tanks are plastic Kritter Keepers bought from Amazon. The whole thing cost less than $500, and it’s grossly over-engineered. We were basically collecting from two tanks at a time all summer long, and it produced 50-100+ eggs every day, routinely. We’d only need a handful for observations and experiments, and the rest got thrown into an incubator (or down the drain), and the survivors were raised to produce another generation that will be ready to pump out eggs for us next summer. Or I could collect eggs every day during the school year, except that I’m expected to teach, not just play with the fishies.

I should mention that this is also a low-maintenance system. I feed the fish twice a day — you know, the usual sprinkling of a few tasty bits of ground-up invertebrates on the surface — and top off the reservoir and check the water quality once a week. It just keeps going, and would grow and grow if I let it. Zebrafish are so easy.

Periscope is also really easy. I’ll probably try it again later this week; I thought I’d give another tour, this time of my nice Leica scope with epifluorescence and DIC and a Jenoptik cooled CCD camera, which is also a little farther away from the gurgling water system, so maybe I’ll be more audible. Later still maybe I’ll set up some embryos/cells on the scope and give a close-up look at how baby fish are made.

Oh, and if anyone else wants to try some small scale zebrafish production, there are lots of sources. I stole many of the ideas from my pal, Don Kane, who has instructions for a similar little system for zebrafish. Or you can read Lawrence and Mason, who give an overview of basic principles. Kim et al. also published a detailed description of their homebuilt system. Or, if you have lots and lots of money, there are companies that build specialized racks and water systems just for zebrafish, and you don’t even have to get your hands wet or sniff PVC solvent or buy a bunch of interesting valves and widgets that will put you on a DEA list somewhere.

Fins made of straw, easily knocked down » « What about the men?