In response to Neil Shubin’s recent paper on the subject, and Carl Zimmer’s summary, the creationist Michael Denton criticizes evolutionary explanations for the vertebrate limb. It’s a bizarre argument.

First, here’s the even shorter summary of the Shubin work. Ray-finned fish have, obviously enough, rays in their fins — rigid bony struts that provide structure. These rays are formed dermally. That is, osteoblasts deposit bone on the surface of a connective tissue matrix to build the rods of bone that prop up the fin. It’s called dermal bone because the classic example is the assembly of bony elements within the dermal layer of the skin.

Another way of making bone is endochondral. You start with a framework of cartilage, and cells within the cartilage (which is what “endochondral” means) gradually replace the cartilaginous tissue with bone. Your limb bones, for instance, are endochondral, starting out as fetal rods of cartilage that were replaced by the action of osteoblasts.

What the researchers in the Shubin lab found is that fish fins, which have dermal bone, and tetrapod limbs, which have endochondral bone, use the same cell signaling pathways and cell movements to build the cellular structure of the limb/fin, but differ in the final steps. Fish switch on the dermal bone pathway, while tetrapods use the endochondral pathway. We have a fundamental similarity than simply uses a different end-product, which ties the assembly of fins/limbs more closely together than we had thought.

Not to Denton, though! He wants to make some strangely saltational argument that these two modes of bone formation are somehow incompatible. I’ll show you his final conclusion, so you can decide to bother with the rest.

In short, my assessment is this: There never were any transitional forms making both dermal bone and endochondral bone. Organisms made one or the other.There never were any transitional forms with fin rays and digits. And I predict that no matter how extensively the fossil record is searched, the phenotypic gap between fins and limbs will remain even as the genetic gap continues to diminish. 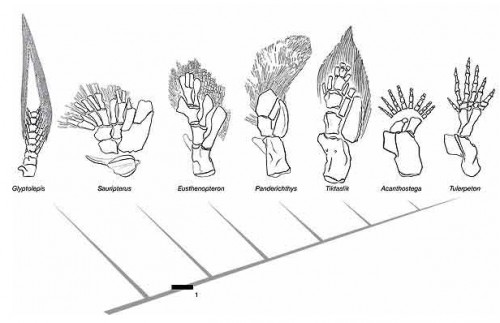 We’re done. Denton’s claim has already been addressed and refuted. How can he not know this?

You can just stop now. His whole argument is dead in the water. But you could take a look at the thought processes that led to that stupid conclusion, and they’re kind of weird, too.

I think he has omitted some of the important and obvious challenges to the Darwinian framework implicit in this work. On any consideration, these advances (and many other similar in the evo-deco area) provide no support for the Darwinian causal framework — a long sequence of small adaptive changes unconstrained by any factors other than immediate adaptive utility — as sufficient to propel the evolution of the limb from fins.

Most changes are not adaptive. Adaptive utility is not the only constraint on change, and is often ignored by the process. Disregarding his 18th century conception of evolution, though, his logic is faulty: of course finding that the transition between two forms only requires a small number of molecular changes makes the ability of evolution to generate the new form simpler.

He even acknowledges this.

This evidence provides further support for the notion that the genotypic distance between fin and limb may be far smaller than previously envisaged. It is indeed intriguing that, as in other areas of evo-devo, the less the genetic distance across an evolutionary transition, the more the evidence for evolution grows.

Yes? So? Finding a smaller genetic difference, as Shubin has done, is increasing the evidence for evolution. What’s the problem?

But ironically, at the same time, the less room there is for Darwinism as a creative agency. Its as if the hand was already in the developmental genetics of the fin, so to speak, awaiting evolutionary expression, perhaps generated by a relatively small genetic trigger.

He’s using that creationist buzzword, “Darwinism”, but setting that aside, selection is not a creative agent anyway. There is no “hand” waiting inside the fish fin, requiring only a simple trigger to make a hand. No one proposes such a thing, except creationists.

On such a scenario, there is absolutely nothing left for the agency of cumulative selection to do. Evolution would be completely constrained by the deep homologies underlying all vertebrate lateral appendages and is just an unfolding of alternative phenotypes already inherent in these shared commonalities.

But note: fish fins and human hands hold shared commonalities, as the scientists Denton ignores keep showing, but they are different. There are accumulated small regulatory changes that shaped the hand from the ancestral fin, so there are differences as well as similarities. The fact that fish do not spontaneously develop fingers ought to tell you that there is something that evolution over time had to have done.

That’s about as much as I can take. Denton goes on and on, trying to claim that somewhere in the history of the limb there had to have been a saltatory change (which is true; a single nucleotide change is a kind of leap that can radically change a protein), and that a mutational change would have occurred without an adaptive end (also trivially true), and therefore…evolution is false?

That makes no sense at all. Denton has some kind of bizarro version of evolutionary theory in his head that is completely lacking in chance events, to the point where he thinks even mutation must have an adaptive purpose. That version of evolution is also already known to be false, so once again he’s patting himself on the back for refuting something that no one believes.

Stop it, Apple. Enough. » « An almost automated fish farm (but not for Minecraft)