The Wall Street Journal featured a full page ad from a group denying the Armenian genocide.

The content of the ad itself is pretty bland (“Truth = Peace” and a peace sign could be swapped in for almost any cause), but its purpose is not: To deny that as many as 1.5 million Armenians were systematically rounded up and murdered by the Ottoman government in what is now Turkey, mostly in the year 1915. The modern Turkish government has famously scoffed at the truth of this historical event, despite a century of scholarship and eyewitness accounts. Measures in the United States to officially recognize the genocide (through a congressional resolution, for example) have gained wide support but ultimately failed, mainly because of Turkey’s role as a regional military ally.

It’s also a familiar argument that they make.

The ad contains a URL for the genocide-denial group FactCheck Armenia, the unfounded arguments of which boil down to 1) It wasn’t actually that many people, and 2) The Armenians started it. That group is itself a part of Turkic Platform, a pro-Turkey group that attempts to distract from discussion of the genocide with events like Times Square dance routines. That the caption on that Getty photograph refers to the ethnic cleansing as “the 1915 incident” shows how much success the deniers have had in this country.

Isn’t that always the case? The Jews were wrecking the German economy, and besides, the Nazis didn’t kill 6 million of them, but only a million, tops. The Indians killed white settlers on their land, making it necessary to fight them, and there weren’t that many of them living here, and besides we gave them those nice reservations to live on. It was Africans who sold their own people to slave traders, and we weren’t killing them — we gave them a nice life suitable to their abilities. It just goes on and on.

I have two thoughts when I hear that vileness.

The photo the article referred to is a perfect example of one. 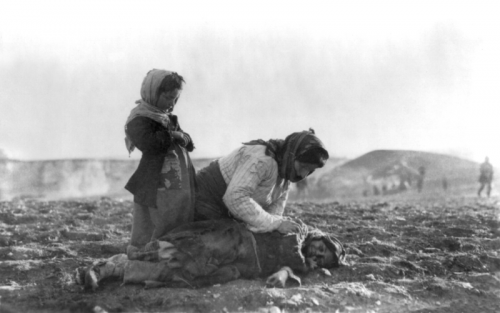 You want to argue that it wasn’t all of 1.5 million people murdered. What number is acceptable? Because I see one dead child and that’s too much.

My second thought is an assumption. Why do you want to deny this historical fact? Because you want to do it again..