At least that’s what the Heritage Foundation says. It’s going to kill 900,000 babies.

On the surface, abortion and same-sex marriage may seem unrelated. However, as explained in an amicus brief of 100 scholars of marriage, filed in the pending Supreme Court marriage cases and summarized here, the two are closely linked in a short and simple causal chain that the Supreme Court would be wise not to set in motion.

Of course, this being the Heritage Foundation, they lie. There is no short and simple causal chain linking the two — what they have is an over-extended correlation stapled together with unjustified and indirect assumptions.

Their first observation is that marriage rates have gone down in nations and states where same-sex marriage is legalized. This is sort of true, they have. But what they don’t tell you is that marriage rates have been declining for decades. They try to paper over this awkward fact by arguing that the marriage rate was stable…between 2009 and 2012. This looks an awful lot like their strategy in dealing with climate change: find a few data points on one side, then a few data points on the other, and draw a line between them. 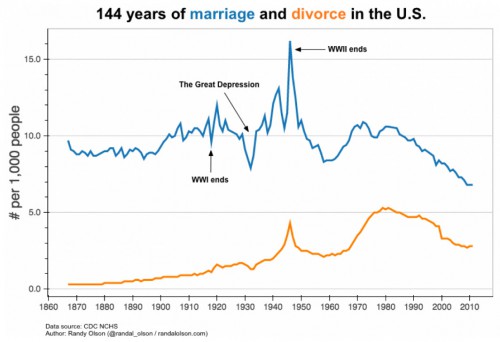 But by making up a correlation and cherry-picking data from a few places, they then claim that same-sex marriage causes a decline in marriage rates. This is not true. And even if the data did support their correlation, that is not evidence of a causal relationship.

It’s a baffling argument in the first place. Do they think men and women break off their engagements to each other because the law suddenly makes same-sex relationships available?

The next step in their argument is to point out that single women get abortions at an almost 5 times greater rate than married women. I can believe that. Marriage can provide a supporting framework for having children, and also immediately removes the stigma from pregnancy — the stigma that conservative organizations like the Heritage Foundation encourages. (Hmm, that suggests that maybe, by vilifying single mothers and unwed pregnancy, the Heritage Foundation kills babies, using their same logic).

Notice, though, that once again they have made a correlation between married status and abortion rates — they have not shown a causal relationship. There is no reason to think that being single causes women to have abortions, even if the logic behind it is plausible.

And of course, they don’t even consider the central question: why should we equate abortion with killing babies, and for that matter, why should either being single or having an abortion be considered undesirable?

We have a term for that, Neil deGrasse Tyson: Intelligent Design » « Apparently, the European convention on human rights has done a few things