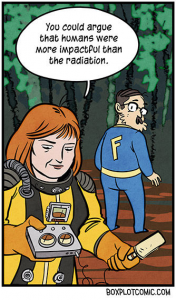 You could argue that humans were more impactful than the radiation.

Boxplot has been running this comic series on the science behind the video game Fallout — basically its about the reality of radiation. You know it’s not good for you, right? It doesn’t give you superpowers, and mutations in somatic tissues are called “cancers”?

But at the same time, there are a couple of places where radiation drove people away — Fukushima and Chernobyl come to mind — and we’re currently seeing a remarkable rebound, as nature comes rushing in to flourish. There’s the temptation to wonder if maybe radiation isn’t as bad as the scientists say it is.

Rather, though, we should be making the point in the panel above and to the right. Humans are much worse for the environment than we think.