The Republicans are flailing about to promote their regressive social agenda, and they’re succeeding, at least temporarily. While we’re all distracted by the spectacle of presidential elections, they’ve managed to control legislatures and governorships in many states, and that means they get to push through all kinds of ugly laws.

So North Carolina has passed a ‘bathroom law’, which seems to be the new strategy for getting public approval of odious legislation. They’re making sure men don’t get to sneak into women’s restrooms, how can you disagree with that? Well, I can, but appealing to modesty and privacy works as a great stalking horse when what you’re really about is oppressing minorities. The NC bill isn’t just about regulating bathrooms.

McCrory’s statement and tweets tonight only mention the so-called “bathroom issue” – but in fact the bill excludes LGBT citizens from protections in housing, employment, and public accommodations. The bill also overturns not only the LGBT rights bill in Charlotte, it repeals similar laws in eight other North Carolina municipalities.

McCrory also keeps emphasizing that it is a “bipartisan” bill. There were a few Democrats who voted for it initially, but how can you call it bipartisan when every Democrat in the senate walked out on the vote in protest? It seems to me that that is kind of the opposite of bipartisan support.

So not only are they passing oppressive legislation, they are constantly lying about it. Business as usual for the Republicans, I guess.

Remember this next fall. The election isn’t just about the highest office in the land, it’s also about the entire poisonous nest of scumbags at every level of government. Vote the Republicans out. Don’t even let a professed Republican be elected to dogcatcher. 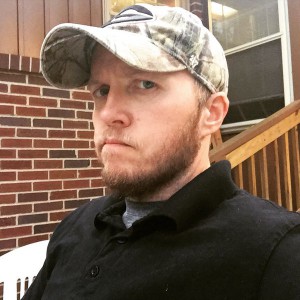 A nice twist on the North Carolina law: see this manly bearded fellow? He’s a transgender man. He’s now required by law to use women’s restrooms in North Carolina.

It’s going to be spectacular, what with all the conservative crania exploding, when someone tries to prevent him from entering the room the law says he must use.

I’m sure there are also transgender women who are going to blow everyone’s mind when they use the men’s room. The proponents are all thinking about enforcing strict gender norms, and they’ve just taken an action that is going to make all the people who don’t fit in their narrow little boxes more prominent.

The Bundy clan are filthy vandals » « What is wrong with National Geographic?