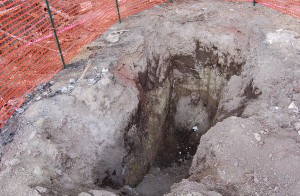 The people who occupied the Malheur refuge were more than just sanctimonious criminals — they were also disgusting. Here’s a gallery of photos illustrating the wreckage they left behind. They trashed the place. They wrecked the land. They disrespected the property of the people who worked at the refuge while demanding that their property rights were paramount.

That photo is of their legacy: a shit-filled trench.