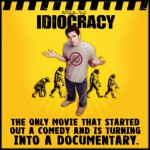 Then stop praising the accuracy of Idiocracy. I loathe that movie, and right now I’m seeing a lot of smug Democrats talking about how it’s coming true.

I never expected #idiocracy to become a documentary.

No. Idiocracy is a movie that assumes all the premises of social Darwinism and eugenics are true. Try watching it and noticing how it thinks evolution works. Poor people are biologically inferior and inherently stupid, and since they’re breeding madly, they’ll overwhelm the superior, intelligent, responsible people who restrain themselves. It assumes that the poor are stupid, and the stupid are poor.

It is especially ironic that people are praising its veracity now because of Trump and the Republican presidential slate. Do I need to point out that these terrible people are the products of good schools and are loaded with cash? Donald Trump is a billionaire and the others are millionaires backed by other obscenely rich billionaires…yet somehow, ignorant, pampered, selfish lower class people are going to poison the gene pool with their substandard genetics, swamping out the potential of the human species?

Others have noted the fallacious premise driving the movie.

The origin story for Idiocracy’s future world of half-wits is that uneducated people in the early 2000s are having kids and smart people don’t reproduce enough. It’s clear from the film that the intelligent people are wealthy, while the uneducated people are poor. So we’re starting from a position of believing that wealthy people are inherently more intelligent and, by extension, deserve their wealth. This link between intelligence and wealth is perhaps the most dangerous idea of the film and pretty quickly slips into advocating for some form of soft eugenics to build a better world.

If only we could get rid of the uneducated Americans (read: redneck poors) and we’ll have the opportunity to live in a utopian world filled with smart and civilized people. Of course, everyone here in 2014 making a reference to Idiocracy as a pseudo-documentary identifies with the soon-to-be-extinct intelligent class. They believe it’s the “others” — the dumb, impoverished people — that are ruining America with their binging on crap TV and crap internet and crap food.

This is pure, unadulterated social darwinism. It’s a movie that reassures its viewers that because you’re smart enough to see how stupid rednecks are, you are one of the good, worthy people who ought to be rewarded and encouraged to have more children. It is your responsibility to reproduce, lest those feeble-minded nitwits have more children than you.

It’s also a message that resonates with certain atheists.

It’s also a message at the heart of many racists: we must protect the pure Whites before they are outbred by all the Mud People!

I’ve complained about this belief before. It’s shameful to see so-called progressives in the 21st century praising a movie that promotes the ideas of eugenics, and that Nazis would have found perfectly copacetic.