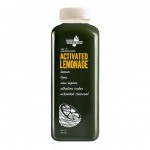 Aaargh. In an article about an organic food store, I get lots of buttons pushed: food fads, weird notions about nutrition, Gwyneth-Paltrow-style airy BS about purging oneself of toxins, all that kind of crap:

As a downtown crowd of artists and models balanced long nights of extreme revelry with long days of extreme diet and fitness, Organic Avenue became more of a destination, opening its first street-level shop in 2006 on Stanton Street and offering, among à la carte items, juice cleanse programs that might entail forgoing solid food for anywhere from one to five days in favor of concoctions made from blue-green algae, beets and the like.

If you’re going in for a colonoscopy, you’ll be told to go on a low-fiber liquid diet for a day or two, to clear out your colon for inspection. But this nonsense about “juice cleanses” is absurd. In fact, just run away if anyone uses the word “cleanse” in reference to your diet.

But it saves the best for last. There’s a new fad going around among the excessively wealthy right now.

Ms. Wolkoff who now runs her own agency that creates collaborative relationships and strategic partnerships, soured on Organic Avenue before it shut down, favoring Juice Press smoothies. And she has lost interest in cleanses altogether, focusing instead on learning more about the latest trends in wellness, like juices that include sooty substances said to absorb toxins in the body.

“Everyone is talking about coal and charcoal,” she said.

Oy. It’s like they hear teeny-tiny fragments of actual science and then blow it up into a food trend that justifies exorbitant prices with a pseudo-scientific justification. Carbon can be processed to create a kind of fluffy microstructure, with lots of tiny pores; it has a tremendous surface area that means it can adsorb lots of other molecules. I use it in my aquaria, because it can bind lots of bacteria and ammonia and amplifies the effect of biological and chemical filtration. If you ingest something toxic (I mean, actually toxic, not as in “containing the buzzword ‘toxin'”), a big dose of carbon can compete with your intestinal lining for adsorption of the poison, and help remove it before doing damage.

But people drinking black juice with the word “Activated” on the label isn’t going to do a thing for you, unless you happened to drink a good slug of arsenic around the same time.

I will say that there is at least one article that, while taking the generic ‘toxin’ crap for granted, seems to have a level-headed approach to the new charcoal food fad. Drink black juice for attention, and its status-seeking, conversation-starting properties, and as a symbol of pointless conspicuous consumption, but let’s back off on the untested, unlikely health effects.

Why did it have to be physics? » « <falls down laughing>