Earlier this summer, Michael Shermer wrote a column for Scientific American to explain Why Do Cops Kill?. I was rapturously unaware of it because he’s an author I long ago decided I could ignore, but just recently a reader had to destroy my state of ecstatic ignorance by pointing it out to me. I read it with growing disbelief, my jaw sagging further and further at the dreadful illogic and the scientismic insipidity of the thing. How does he still get published?

To make it short, for those who prefer not to read anything associated with The Shermer, his answer is…it’s not racism, it’s because they have brain circuitry. No, really. It’s even illustrated with a cartoon of a clockwork murder-bot. 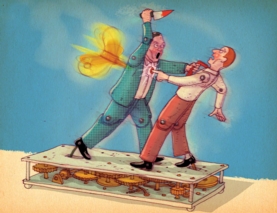 The ongoing rash of police using deadly force against minority citizens has triggered a search for a universal cause—most commonly identified as racism. Such soul searching is understandable, especially in light of the racist e-mails uncovered in the Ferguson, Mo., police department by the U.S. Department of Justice’s investigation into the death of 18-year-old Michael Brown.

When black people are being killed at a greater rate than white people, and we actually have racist documents written by perpetrators, then why yes, racism does seem like a likely explanation. What more do you need?

Since that’s the opening paragraph, you know what’s coming next: a great big enormous “BUT”.

To whatever extent prejudice still percolates in the minds of a few cops in a handful of pockets of American society (nothing like 50 years ago), it does not explain the many interactions between white police and minority citizens that unfold without incident every year or the thousands of cases of assaults on police that do not end in police deaths (49,851 in 2013, according to the FBI). What in the brains of cops or citizens leads either group to erupt in violence?

Oh. Start by diminishing the problem: it’s only a few cops in a handful of pockets, and we are so much better than we were 50 years ago. You can tell right away that this was written by a white guy who wants to handwave away the problem.

But then comes a line of reasoning that has me wondering what drugs he was on while he was writing this piece. We can ignore racism as an explanation, because white police don’t shoot all the black citizens they meet, and the majority of interactions between police and citizens don’t involve violence. Police kill about a thousand people per year, but we should ignore that because they don’t usually kill people? That makes no sense. No one argues that racism is only expressed in the form of murder sprees against black people, so telling us that the police don’t kill every black person they meet is awfully poor evidence that racism isn’t a factor.

Likewise, telling us that almost 50,000 instances of non-lethal attacks on police officers occurred is a total non sequitur. It is irrelevant. The article starts with the problem of the police killing black people, declares it a small and shrinking problem, and then tells us that there were a lot of cases of people fighting against police officers? It makes no sense. That datum does not address his thesis in any way.

He also selectively cites that data. 50,000 attacks sounds like a lot — those poor oppressed policemen — but that figure includes all incidents of resisting arrest, not the ones where an officer was killed. That number is smaller: 76 officers died in the line of duty in 2013. Of those, 49 died in traffic accidents, and 27 as a result of criminal attacks. 27 is still too many, but if we’re going to compare murder scores, the police are winning.

But even those numbers don’t let racism off the hook. Shermer needs a non-racist scapegoat, so he digs down and comes up with an even more irrelevant and stupid explanation. It wasn’t racism, it was their brain that made them kill.

An answer may be found deep inside the brain, where a neural network stitches together three structures into what neuroscientist Jaak Panksepp calls the rage circuit: (1) the periaqueductal gray (it coordinates incoming stimuli and outgoing motor responses); (2) the hypothalamus (it regulates the release of adrenaline and testosterone as related to motivation and emotion); and (3) the amygdala (associated with automatic emotional responses, especially fear, it lights up in response to an angry face; patients with damage to this area have difficultly assessing emotions in others). When Panksepp electrically stimulated the rage circuit of a cat, it leaped toward his head with claws and fangs bared. Humans similarly stimulated reported feeling uncontrollable anger.

Jeepers, that sounds so sciencey. Look at that! Networks and circuits, generally obscure polysyllabic neuroanatomical terms, and cats with electrodes planted in their heads!

OK, so who’s been going around installing chronic stimulating electrodes into cops’ amygdalas? If only we could get them to stop doing that, it would end this epidemic of seeming racism.

Once again, like throwing random numbers around in the first part of his essay, this neurobiological explanation is empty and useless. I don’t deny that there is brain circuitry involved in violent responses…of course there is. But it doesn’t explain why one cop gunned down Michael Brown.

I would ask the obvious question. Does Michael Shermer have a rage circuit in his brain? Yes, he does. Does that explain why he’s a raging racist? That latter question is not implied by the fact that behavior is driven by neurons. Having this circuitry does not mean you are determined to murder black people. I have a rage circuit. You have a rage circuit. All the victims of execution by the police had a rage circuit. His explanation is as pointless as telling us that there is are motoneurons in our spinal cord that excite the flexor digitorum profundus to contract, causing our trigger fingers to bend.

You cannot reduce people to a collection of proximate causes. That Shermer thinks you can, and that this is a profound explanation, is as much a case of useless babble as claiming that it was sin or demons or an imbalance of humours that is causing inequities and racial tension. It is not helpful. It has no explanatory power. It is fucking stupid.

But this man has a column in Scientific American.