A creationist dared me to explain this. 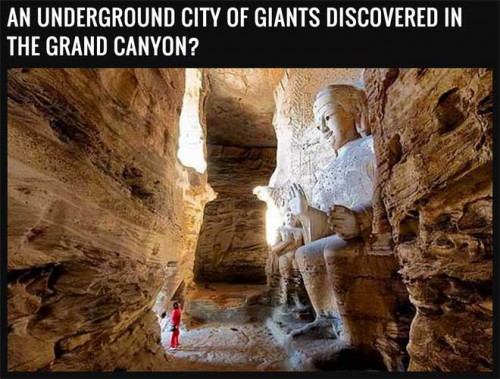 It’s part of a story that claims there were giants in those days, and they were living in a citadel at the end of a mile-long tunnel in the Grand Canyon.

According to an article published in The Arizona Gazette on April 5, 1909, the Grand Canyon was once home to civilization that most likely consisted of individuals of cyclopean proportions. If such a civilization ever lived, surely it would have left behind some structure as a testament of its existence.

It took about 10 seconds: Google image search reveals the source of the picture: it’s from the Ningwu Ice Caves in China. Go ahead, check it out. You will be amazed that the paranormal site didn’t even bother with any tricky photoshop work. I didn’t try checking the provenance of the other images scattered through the stupid article, but I suspect they wouldn’t be hard to find.

Now explain this: skepticism is easy. When absurd claims are made, it’s trivial to either reject them because proponents fail to provide credible evidence for them, or they provide ‘evidence’ that is clearly fake.

So what’s wrong with these gullible people that they so readily accept nonsense?

Did you have to remind me? » « The breast that ate Terra Haute