A crime has been reported. A person saw something abominable while they were trying to eat a nice greasy meal at TGI Fridays, and like the responsible conservative adult they are, they surreptitiously took a photograph of the obscenity and reported it on social media. Don’t click through to see the photograph unless you are prepared to witness a horror.

Here’s what motivated a righteous citizen to publicly shame this woman. 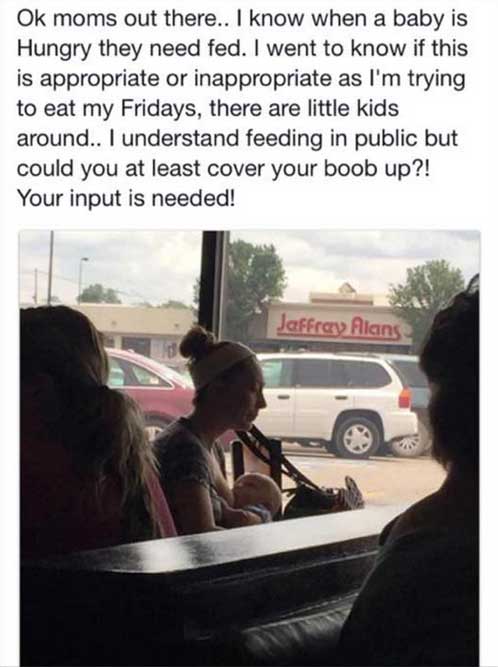 Well? Are you horrified?

But she did write a reply, and I include it here for those of you who don’t have facebook.

Yesterday I was shamed on social media for feeding my son in public.

I have been contemplating what to do about it ever since, so here it is.

This picture was taken, without my knowledge, of me feeding my son at TGI Friday’s in Terre Haute, IN.
The man who took this picture was a complete stranger to me, he was sitting 3 tables away from us with his young daughter.

He snapped the photo and then put it up on social media (Facebook and Instagram), many of the comments that followed were nothing less than harassing and shameful to, not only me, but every past, present, and future nursing mother.

Over the course of a couple or hours it was taken down and reposted multiple times before it was finally deleted.

I was really very hurt by this act, because I was in no way bothering him, so what gave him the right to shame me?

After I found out his name I responded to him in a private message that read:

Dear Mr. (Name removed, because I’m not bashing like I was bashed),

I just wanted to let you know that I am the mother who was breastfeeding my son at TGI Fridays today. I am also the woman that you felt the need to take a picture of while I was doing so. Then proceed to post said picture on social media in a shameful manner. As I was admiring how adorable your daughter was, you were posting pictures of me on Facebook and Instagram.

While I in no way, shape, or form owe you any explanation I would like to clarify a few things. I did nothing wrong, I turned away to latch my son and pulled my shirt back up when he was finished out of respect for others in the restaurant. I do not use a cover, because my son fights them, screams, and doesn’t eat at all while under them. If he had been screaming because he was hungry then I would be a bad mom for not feeding my hungry child. I did not pump before leaving home, A-because my son does not like to take a bottle and B-because it is my right to feed him any way I see fit wherever I see fit.

I wanted to thank you for showing the public your ignorance and for shedding light on a topic that is near and dear to my heart. Through your violation of my and my child’s privacy you have done a few things.

First, you’ve shown your true colors to many and you’ve exposed others who are likewise simpleminded. While you meant to come across as exposing a violation of your rights and the rights of others, you fell into your own hypocrisy. You violated the rights of not only me, but my child. Did you know it is illegal to share the pictures of minors without the expressed permission of their legal guardian? I get that you felt uncomfortable looking at my breasts. Here is a novel idea, don’t look at them.

Secondly, you have given me a platform and a drive to advocate breastfeeding ferociously. You’ve inspired me into a call of action. Rest assured, there will be action. Not only by me, the one you violated, but others like me who feel you violated them and their rights. Those that you are degrading by shaming the act of feeding their child. How I pity those who would actually belittle a mother for taking care of her child.

Third, you have challenged me and my character. You’ve given me the opportunity to display what kind of person that I truly am during a time of negativity. I now know that I am strong, you didn’t break me, in fact you made me stronger. I am kind to someone who has wronged me. Believe me, this is kind…

I am also intelligent, I know all the facts about breastfeeding and I know what I am doing is best for my child. I chose to do it not only because it’s rewarding, but because it is what is best for them. I am resolved, not only in my choice to breastfeed my child, but to do it whenever and wherever I want.

I am backed up and supported, in my choice to breastfeed, by FEDERAL law. Wherever I am allowed to be, I am allowed to feed my child there also. While I appreciate you taking down my photo and backpedalling into a sort of apology…

Know this, I will not tolerate any sort of action like this again. If you post the picture of my child and me ever again I will seek legal action. I will publicly shame you as you have shamed me. I will be supported by a multitude of other moms, dads and advocates of breastfeeding. We will be heard.

I strongly encourage you to educate yourself as well as your daughter about breastfeeding. Breasts are meant to be used to feed our young. It is society that has sexualizes them. Children do not sexualize breasts until they are taught to do so. I pray that if in the future your daughter chooses to breastfeed that she is not shamed and does not have her picture plastered all over social media.

Sincerely,
The AMAZING mommy you photographed nursing her beautiful child.

He responded with a very short and, what seemed to me, a very insincere apology in a private message. Never once did he admit his ignorance to the public.

“Why didn’t she feed him before she left home?”
My response- I did, we live an hour from Terre Haute and had already been there over an hour. It had been almost 3 hours since he ate last.

“Put a cover on!”
My response- my son hates covers, he fights them, screams, and doesn’t eat under them. So I would have been disturbing your dining experience even more.

“I don’t want to see that”
MR- avert your eyes!

“Go elsewhere like the car or bathroom”
MR- I was parked at babies R us, not walking all the way there just to nurse. I was eating too! And I wasn’t going to leave my company alone just so I could nurse in private. I will feed my child in the bathroom when every adult eats their meal in there as well.

“That’s what nursing rooms are for”
MR- it is my right, as well as federal law, to feed my child anywhere I am allowed to be in any way I choose. Plus, the mall does not even have a nursing room so that argument is invalid.

“Should have pumped before they left and brought a bottle”
MR- my son doesn’t like to take a bottle and fusses with it more than anything, one of the reasons we were even in town was to get a new power cord for my pump.

“Does she really just have to flop it out for everyone to see?”
MR- I didn’t just “flop it out” I turned away from everyone to latch my son on and when he was finished I pulled up my shirt out of respect for others in the restaurant. So the only thing anyone could see is what is in the picture, and if a little side boob offends you then stop gawking at it. Even if I did just flop it out it’s my business. You see less while I’m nursing than some people show at Walmart, not to mention the posters of VS models in the mall. If I had just been a scantily clad female it would have been no big deal.

“If it’s a natural thing then why can’t men carry around urinals and use them wherever, whenever? That’s a natural bodily function too! Same thing.”
MR- first of all milk from my breasts is not bodily waste, and second, unless the reason you have that urinal is because you intend to use it to feed your child, then in no way is it the same as me nursing my baby.

“There were children there”
MR- children are not born thinking that breasts, or anything, are sexual. They are taught to think that way by society.

“Breastfeeding is a special and beautiful thing between mother and baby and should be kept private”
MR- yes it is special and I am blessed to have such a bond with my child, but if it is so beautiful and special why can’t everyone enjoy it? If a mother wishes to keep it private that is her prerogative, I choose to feed my child when he gets hungry. The act of breastfeeding has the sole purpose of feeding my child, just like bottle feeding. If that is the argument then bottle feeding a child should be done in private as well.

“What about the rights of those dining in the restaurant?”
MR- yes what about their rights? Like mine and my child’s?

“If the baby was going to get hungry then stay home”
MR- I can’t even justify responding to this, that is how absurd this statement is.

It is not the fact that the picture was taken, or even that it was put on social media that bothers me. If he wanted a picture he should have just asked, I would have gladly smiled:)

It is the fact that it was done so in a way that aimed at shaming my child and I, as well as every other nursing mother, for taking care of my baby.

Let’s show everyone that we will not stand for being put down, shamed, and harassed for simply fulfilling our children’s most basic need.

We as a society should embrace the fact that God made mothers able to feed our children from our own breasts. We need to educate ourselves, society, and our children on the fact that breasts are not made to sell lingerie, food, clothes, electronics, and just about everything else out there, we were given them to feed our babies, that’s it.

ALL MOMMIES SHOULD BE ABLE TO FEED THEIR BABIES WHENEVER, WHEREVER, AND HOWEVER THEY CHOOSE!

I know who should be ashamed. It’s not Conner Kendall.

Skepticism is easy » « I learn something from SE Cupp!