Here are the results of a survey on food policy. It’s revealing. 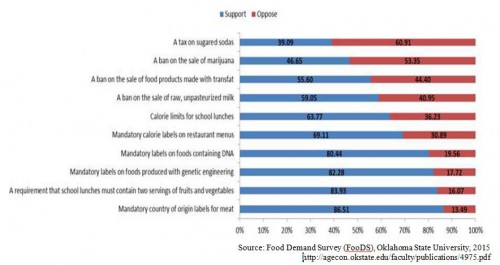 Some things seemed reasonable, others a bit crazy. I thought the idea of a tax on sugared sodas was a good one, but it’s the least popular idea on the list. Almost half the people support a ban on marijuana, which is silly and destructive.

But the one I boggled at was the seventh one down. Mandatory labels on food containing DNA. 80% of those surveyed thought that was a good idea, only slightly less than those demanding mandatory labels on GMO foods. But, but, but, you splutter, that’s basically everything. If it’s food that’s made from organisms, it’s tainted with DNA. I tried to think of what I could buy at the grocery store that might be DNA-free, and I came up with…heavily sugared sodas, maybe? Those cheese products that taste like they’re made from petroleum? Bottled water?

All those lovely things touted as good and healthy for you — fresh fruits and vegetables, for instance, and even those things that might not be so good for you, like bacon — are full of DNA.

Oh, well. I can think of one question that would probably produce even worse responses from an ignorant public.

Should we have mandatory labels on food containing chemicals?

A not-bad idea from some Republicans » « The glare was so bright, I might go blind