The Olympics have always been political, always been tied to the nationalist aspirations of the host country. Always. Even when they are hosted in relatively benign countries, we should be wary of this attempt to hijack what ought to be simply an international athletic event into propaganda. (It’s not just the Olympics, either; what is it with people that they have to turn every sport into a municipal or regional battle, even when the athletes are basically mercenaries hired to represent Seattle or Detroit or Green Bay?)

But these Russian Olympics are something special. What if a country decided to show off by hosting an international event, and then all they managed to show off was incompetence, corruption, and hatred? Because, man, the Sochi Olympics are going to go down in the history books. Maybe they’ll pull out all the stops and get the hotels built in time; maybe they’ll be able to paper over the graft that’s used to get things done; but one thing they will not be able to hide, because they’re trying so hard to make it official policy, is their persecution of gay people.

Jeff Sharlet visited Russia, and came back with harrowing first-person accounts of assault and torture and abuse, as well as a description of how the apparatus of the state is being used to implement oppression.

The Russian closet has always been deep, but since last June, when the Duma began passing laws designed to shove Russia’s tiny out population back into it, the closet has been getting darker. The first law banned gay "propaganda," but it was written so as to leave the definition vague. It’s a mechanism of thought control, its target not so much gays as anybody the state declares gay; a virtual resurrection of Article 70 from the old Soviet system, forbidding "anti-Soviet agitation and propaganda." Then, as now, nobody knew exactly what "propaganda" was. The new law explicitly forbids any suggestion that queer love is equal to that of heterosexuals, but what constitutes such a suggestion? One man was charged for holding up a sign that said being gay is ok. Pride parades are out of the question, a pink triangle enough to get you arrested, if not beaten. A couple holding hands could be accused of propaganda if they do so where a minor might see them; the law, as framed, is all about protecting the children. Yelena Mizulina, chair of the Duma Committee on Family, Women, and Children’s Affairs and the author of the bill, says that it’s too late to save adult "homosexualists," as they’re called, but Russia still has a chance to raise a pure generation.

Meanwhile, something strange is happening in the US, that bastion of Cold War virtue. Our right wing, which used to hate all things Russian as a matter of reflex, has begun to warm to them: they’ve found common ground at last. I’d say it was kind of sweet, except that that common ground seems to be built on the desire to dig mass graves for gay people. Bryan Fischer, for instance, praises Russia for ahead of us on recognizing that it’s a moral evil to propagandize this lifestyle among teenagers..

We don’t get to stand and wag fingers at Russia, though, because they’re actually just holding up a mirror to us. As Sharlet continues, it’s American Christian Evangelicals who have been fanning the flames around the world.

Mizulina’s dream isn’t old-fashioned; it is, as one fascist supporter told me, "utopian." He meant that as praise. And the Russian dream is not alone. Liberal Americans imagine LGBT rights as slowly but surely marching forward. But queer rights don’t advance along a straight line. In Russia and throughout Eastern Europe—and in India and in Australia, in a belt across Central Africa—anti-gay crusaders are developing new laws and sharpening old ones. The ideas, meanwhile, are American: the rhetoric of "family values" churned out by right-wing American think tanks, bizarre statistics to prove that evil is a fact, its face a gay one. This hatred is old venom, but its weaponization by nations as a means with which to fight "globalization"—not the economic kind, the human-rights kind—is a new terror.

“Family values.” I think families are great, I think we don’t pay enough attention to values or ideals — these are the conceptual tools human beings used to set aspirations, and they’re important. But probably the most effective hijacking ever done in my lifetime was this cunning subordination of “family” to be a synonym for intolerance, hyper-masculinity, and sexual oppression of all kinds. It’s impressive how the right wing has taken a word so fundamental to healthy human living, “family”, and managed to poison it so thoroughly.

And here it is, exposed for all to see in Sochi. The country has been infiltrated by American “Family Values” warriors, and what we’re going to see in the Olympics (if you bother to watch them) is our right wing American utopia.

These pernicious strategies are personified by one man, Scott Lively (but let’s not make the mistake of thinking he’s the source — he’s just one eruption our of a whole pimply infection of swarms of conservative evangelicals). Lively’s mission in life has been to spread his homophobia world-wide. He’s been an inspiration for anti-gay legislation in both Africa and Eastern Europe, and he’s proud of it. 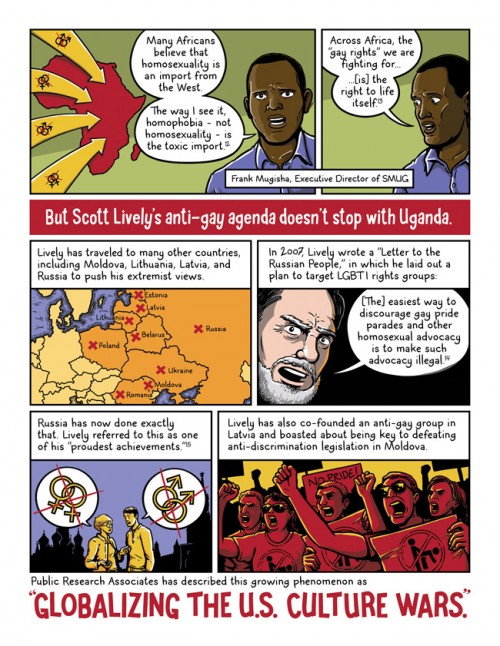 He’s currently been targeted for criminal prosecution in the US under the Alien Tort Statute — it turns out that foreign victims of American abuse actually do have legal recourse here, and there are a lot of dead and maimed bodies that can be laid on Lively’s doorstep. We can only hope that justice is done.

Meanwhile, about that mirror reflecting America’s role in spreading hate…Scott Lively is running for governor of Massachusetts as a candidate who can clearly and unapologetically articulate Biblical values without fear or compromise. Remember that when you scorn Russia.

Another creation-evolution debate, in Pennsylvania » « [Lounge #450]