Uh-oh. I hope these don’t become more popular. This one is in Johnstown, Pennsylvania, on 29 March, and features Paul Nelson — a young earth creationist who will hide behind Intelligent Design the whole time. 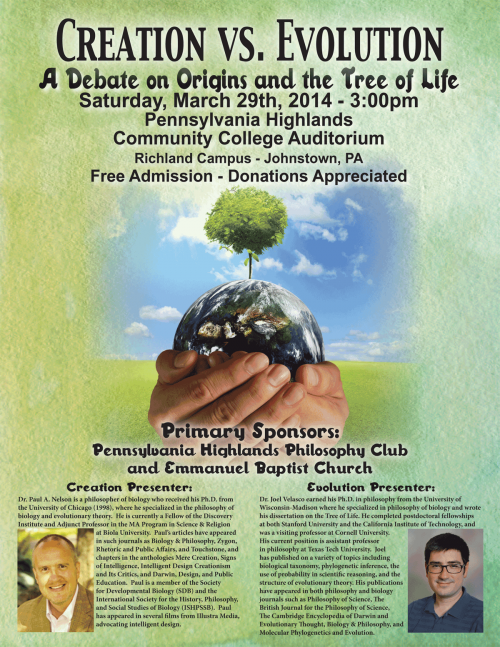 Debates are a great way to seduce a creationist audience into showing up to listen, but they’re awful for presenting a good analysis: you are publicly pitting a scientist up against a proven, expert liar, and committing to allowing lies to be told for half the time of the event. Sometimes they’ll pay off and you’ll get good exposure of the nonsense; sometimes you’ll find the slick fraud on the creation side getting more attention than he deserves.

Just a hint, though. The title of this debate is “Creation vs. Evolution: A Debate on Origins and the Tree of Life,” which is hopelessly broad. Paul Nelson has carte blanche to babble on in a tuneless song of silliness trying to hit the one chord that will resonate with the audience, and that’s what you’re going to get, and it’s going to be really hard to pin him down on anything. Part of the art of doing these debates, I’ve learned, is to craft a decent structured framework for the discussion, so that you’ve got a clear question to answer and even an audience of biased Christian ninnies will notice when the creationist (or the evolutionist!) goes wandering off topic. I hope it’s not too late to refine the subject a bit.

The cuddliest artificial genetic mutant ever » « Another fine American export