Doing what I do for a living, I often find myself reading things on Facebook, Twitter, or those increasingly archaic sites called “blogs” in which the writer expresses concern about industrial effluent in our air, water, consumer products or food. Sometimes the concerns are well-founded, as in the example of pipeline breaks releasing volatile organic chemicals into your backyard. Sometimes, as in the case of concern over chemtrails or toxic vaccines, the concerns are ill-informed and spurious.

And often enough, the educational system in the United States being the way it’s been since the Reagan administration, those concerns are couched in terms that would not be used by a person with a solid grounding in science. People sometimes miss the point of dose-dependency, of acute versus chronic exposure, of the difference between parts per million and parts per trillion. Sometimes their unfamiliarity with the basic facts of chemistry causes them to make patently ridiculous alarmist statements and then double down on them when corrected.

And more times than I can count, if said statements are in a public venue like a comment thread, someone will pipe up by repeating a particular increasingly stale joke. Say it’s a discussion of contaminants in tap water allegedly stemming from hydraulic fracturing for natural gas extraction. Said wit will respond with something like:

“You know what else might be coming out of your tap? DIHYDROGEN MONOXIDE!”

Dihydrogen monoxide is, of course, water. For the sake of quite likely wholly unnecessary but pro forma explanation, water molecules have two hydrogen atoms and one oxygen atom, hence the symbol H2O; “dihydrogen monoxide” is a way of saying “two hydrogens and one oxygen” in a way not wholly inconsistent wiith accepted chemical terminology, though not in a way anyone ever uses except as a joke.

Though I chuckled once or twice when I first heard the joke back in the end-1980s, back when kilometer-thick sheets of solid-phase dihydrogen monoxide occupied the Northern Hemisphere as far south as present-day Kentucky, it got old fast.

I recognize the temptation to poke mild fun of people who make embarrassing mistakes. I’ll cop to having done so myself, f’rinstance in the post I linked above on the phrase “patently ridiculous alarmist statements.” But it’s one thing to snicker at people who have made basic, easily correctable mistakes, especially when you offer them a way to make that correction.

The “dihydrogen monoxide” joke doesn’t do that. Instead, it mocks alleged “gullibility” in a way that dissuades the corrected from learning.

It may have been first used, as far as Wikipfftdia can tell, by students at UC Santa Cruz riffing on a very similar joke that warned people about the dangers of “hydrogen hydroxide”; the students responsible liked the joke and printed up fliers to post around campus, an early form of Tweeting. But they thought “hydrogen hydroxide” wasn’t quite viscerally scary enough to people unacquainted with chemical terminology, so they upped the ante. Everyone had heard of “carbon monoxide,” and everyone knows it’ll kill you, so the three decided on the dihydrogen monoxide synonym as much more scary.

It wasn’t the first time the term had been used. Google Books records it being used as early as 1910, in a magazine snippet ironically poking fun at scientists for their abstruse technology: 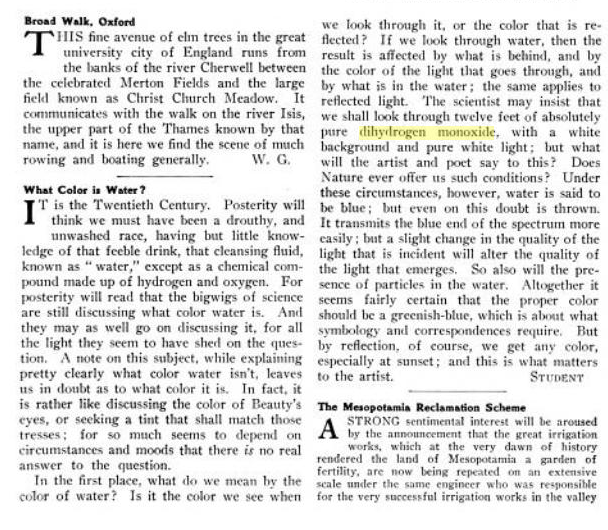 There are a few other examples of the term before 1990, most of them seeming more or less innocuous. It took Usenet to make the joke version spread.

Here’s how the joke works:

And I understand the appeal. I know the appeal, for instance, of writing things that don’t give everything up to the casual reader, that reward the reader who’s willing to ponder, to look things up, to think about things for a while and be comfortable in not knowing what’s there all at once. That’s the whole point of literature, or poetry, of riddlles and puzzles. They’re fun. And they challenge intellectual laziness.

But ignorance — using the word in the strictly literal, non-pejorative sense — is different. Ignorance of science is an evil that for the most part is foisted upon the ignorant. The dihydrogen monoxide joke depends for its humor on ridiculing the victims of that state of affairs, while offering no solution (pun sort of intended) to the ignorance it mocks. It’s like the phrase “chemophobia.” It’s a clan marker for the Smarter Than You tribe.

The dihydrogen monoxide joke punches down, in other words. It mocks people for not having had access to a good education. And the fact that many of its practitioners use it in order to belittle utterly valid environmental concerns, in the style of (for instance) Penn Jillette, makes it all the worse — even if those concerns aren’t always expressed in phraseology a chemist would find beyond reproach, or with math that necessarily works out on close examination.

Besides, I find myself wondering how many of the people who use the dihydrogen monoxide joke would respond appropriately if they were told their Starbucks drink had been proven to contain significant amounts of oxidane. I suspect not many. If that applies to you: “oxidane” is one of two official names approved by the International Union of Pure and Applied Chemistry for a particular chemical substance. The other?  “Water,” and its equivalent in whatever your vernacular might be. See how easy that was to just explain?