Congratulations, Arthur L. and Ina Jean Strobel! They’ve been married for 65 years, a commendable accomplishment. I’m going to recommend, given Arthur’s interests, that for his 66th anniversary, they reward themselves with a real genetics class.

Here’s their anniversary announcement, published at, I presume, their own expense. He rambles on about his service in WWII, and then, strangely, talks about the actions of a German major who was charged with defending a bridge, and who might be a distant relative. Which leads him to talk about the inheritance of the Y chromosome, something about Romans and Celts, salt mines, and National Science Foundation Institutes. Also,

Arthur and Ina Jean consider attendance with and participation in a scripturally based church to to be of high importance for a long, happy, useful and satisfying life. They consider fiscal responsibility to be very important for family stability. They never pay extra for an extended warranty on a television, refrigerator, washing machine, automobile or anything else. They prefer to pay the complete price at the time of purchase for these items as extra pay for financial charges would be unwise. Arthur and Ina Jean consider spiritual and fiscal development and maturity to be worthy goals.

Then we’re back on the chromosome business, where we learn that having a Y chromosome makes you strong, good at chess, and able to solve Rubik’s Cubes quickly, while having two X chromosomes allows you to touch the back of your head with your foot. Also, one trick is to tell stories that don’t go anywhere. Like the time I caught the ferry to Shelbyville. I needed a new heel for m’shoe. So I decided to go to Morganville, which is what they called Shelbyville in those days. So I tied an onion to my belt. Which was the style at the time. Now, to take the ferry cost a nickel, and in those days, nickels had pictures of bumblebees on ’em. Gimme five bees for a quarter, you’d say. Now where was I… oh yeah. The important thing was that I had an onion tied to my belt, which was the style at the time. You couldn’t get white onions, because of the war. The only thing you could get was those big yellow ones… . Oh, wait, no — I got that last bit somewhere else. 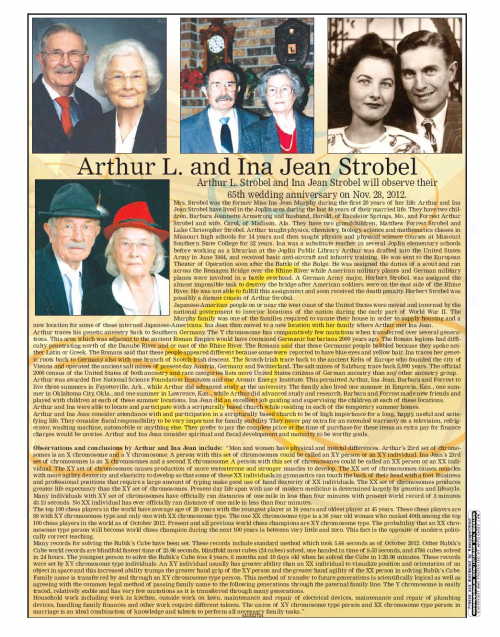 I would not recommend going to the anniversary party. Arthur’s sure to corner you and lecture at you for hours.