I thought physics was the most hubristic scientific discipline of them all, but I may have to revise that assessment. Last week I was sent another of those papers published in archiv, the physics repository, making grand pronouncements about evolution, and I made the mistake of simply dismissing it on twitter — it was simply too ridiculous to post about. But now io9 has picked it up, and more people are clamoring at me to explain it.

Here’s what Sharov and Gordon claim:

An extrapolation of the genetic complexity of organisms to earlier times suggests that life began before the Earth was formed. Life may have started from systems with single heritable elements that are functionally equivalent to a nucleotide. The genetic complexity, roughly measured by the number of non-redundant functional nucleotides, is expected to have grown exponentially due to several positive feedback factors: gene cooperation, duplication of genes with their subsequent specialization, and emergence of novel functional niches associated with existing genes. Linear regression of genetic complexity on a log scale extrapolated back to just one base pair suggests the time of the origin of life 9.7 billion years ago. This cosmic time scale for the evolution of life has important consequences: life took ca. 5 billion years to reach the complexity of bacteria; the environments in which life originated and evolved to the prokaryote stage may have been quite different from those envisaged on Earth; there was no intelligent life in our universe prior to the origin of Earth, thus Earth could not have been deliberately seeded with life by intelligent aliens; Earth was seeded by panspermia; experimental replication of the origin of life from scratch may have to emulate many cumulative rare events; and the Drake equation for guesstimating the number of civilizations in the universe is likely wrong, as intelligent life has just begun appearing in our universe. Evolution of advanced organisms has accelerated via development of additional information-processing systems: epigenetic memory, primitive mind, multicellular brain, language, books, computers, and Internet. As a result the doubling time of complexity has reached ca. 20 years. Finally, we discuss the issue of the predicted technological singularity and give a biosemiotics perspective on the increase of complexity.

Life originated 9.7 billion years ago, huh? Maybe 13 billion plus years ago? I didn’t even have to read the paper: I predicted that there would be a certain graph in it, opened it up, scanned to Figure 1, and there it was.

We’re done. Anyone else see the problem?

They cherrypicked their data points. They didn’t include lungfish, ferns, onions, or some protists because that would totally undermine their premise; those are contemporary organisms with much larger genomes than mammals’, and their shallow, stupid exercise in curve-fitting would have flopped miserably. It’s a great example of garbage in, garbage out.

There’s another figure, in which they slap their ‘origin of life’ numbers on a diagram of the history of the universe. Very convincing. I could also stick a label on such an image and show the ‘origin of clowns’ at the time of the Big Bang. It wouldn’t make it scientific, though. 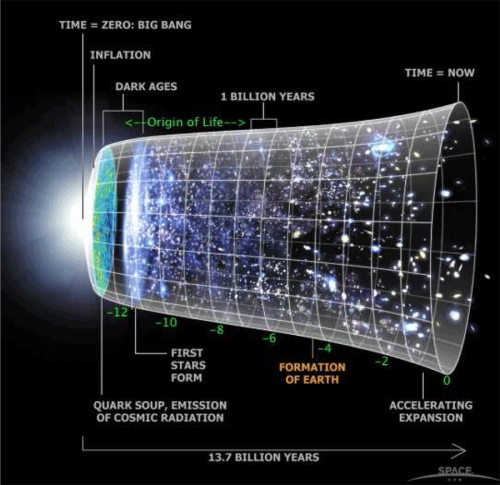 Do they have any other evidence to support their claim? No, not one bit. Most of the paper is a handwavey summary of various models of abiogenesis, with no effort to be quantitative…except for their quantitative claim on the basis of one fudged graph that life originated over 9 billion years ago. There’s also some weird stuff about biosemiotics, which they use to argue for goals and meaning in evolution. It seems to be a popular term among creationists, and what little I’ve read on it from marginally more credible sources makes it look like nonsense.

That graph, though, just kills it. At least try to respect the larger data set, will ya, guys?

This was published in archiv, probably to escape the restrictions of peer review (i.e., slip some bullshit under the door), and really, I read that and thought, “physicists, again?” But then I looked closer at the authors. I am so ashamed.

They’re biologists of some sort. Now I have to crawl off in embarrassment for my discipline.

Why does Jesus get the biggest batarang? » « We’re looking forward to a white Christmas here in Minnesota