And it’s not about those weird rules! Someone got very upset at those gays flaunting their sexuality at games. 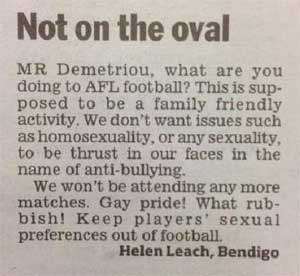 Lest you think that maybe she’s homophobic, she added this in an interview later:

“I am not homophobic. I know lots of gay people.”

Obviously, this issue needs a poll. I would have thought the obvious one would be something about the apparent total lack of women cheerleaders in skimpy outfits at Australian football games, or possibly something expressing incredulity that Australian football players don’t grab each other’s asses when they score a goal, but no…it’s about supporting gay players. And it’s tied.

Should there be a gay pride round in the AFL?

Ooh, I hate to see a tied game. Go break it.

No cookies? » « The Gish Gallop finally comes to a halt