This is Hazel Jones. She has two vaginas.

She has a condition called Uterus Didelphys. Variations of this condition aren’t uncommon, occurring once in a few thousand births. The reproductive tract develops from paired tubes that fuse prenatally, and sometimes the fusion is incomplete, producing a range of arrangements illustrated below. 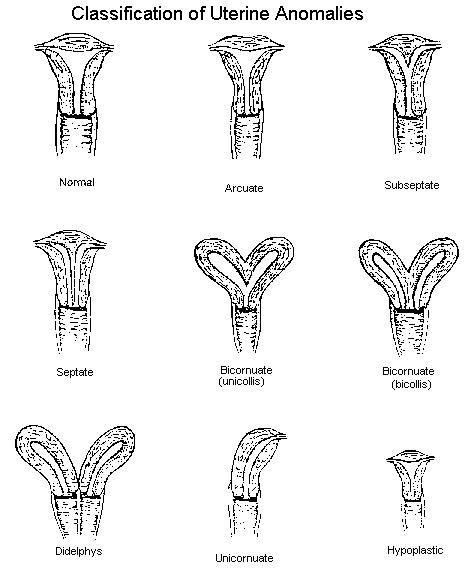 Would you believe a pornographer has asked Ms Jones to star in a movie? (Of course you would — that’s exactly what you’d expect.) In this case, it’s stupid as well as insulting and offensive. Women with these kinds of conditions often don’t even know it until puberty or later — there aren’t any obvious external differences, so when she takes off her pants she looks like any other woman, and no, she can’t have sex with two men at once. In didelphys, the vagina is divided in two by an internal septum, nothing more. Sex with a man just means he can bear a little bit to the left or a little bit to the right and penetrate one side or the other. And even there, it’s possible to get surgery to reduce or remove the septum.

The primary problems for the woman are a little confusion during menstruation, with awkwardness in using tampons; and it does constrain the birth canal somewhat, so caesarian deliveries are recommended.

Here’s another video about the condition (contains closeups of female genitalia, in a clinical setting).