Today is a Tegan-less Tuesday. This may shock you, but earning a PhD takes a lot of work, so instead you get to hear from a couple members of the household who haven’t made an appearance in a while.

When it’s nice out, we let His Holiness Saint Ray the Cat join Raksha on some of her daily outings. He has long since gotten over his childhood trauma, and actually enjoys going outside, sneaking through bushes, and eating grass. The problem is, while he has yet to try to leave our yard, he does like investigating bushes, which means that to let him out, we have to be willing to rummage around in bushes to get him if he’s not ready to go inside when the time comes. In other words, he’s been shut inside for most of the winter, and was thrilled to get the sun and wind on his fur, and grass in his teeth. 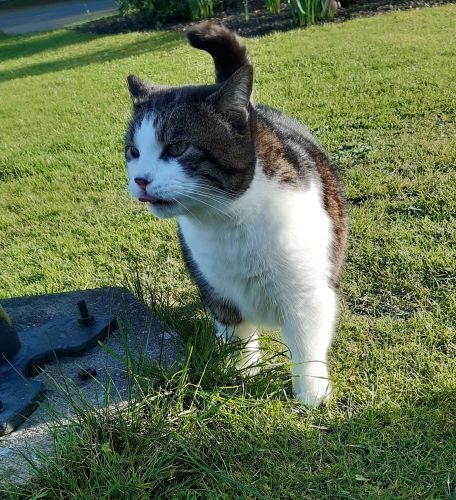 Having sampled the grass by the lamppost, His Holiness sniffs the air and licks his lips.

Just after taking this picture, I went to pick up after the dog, and he scampered into a row of cedar trees where the food waste bins are kept out of sight. I took the dog back to the trash bin behind the house, and went over to root around in the bushes and trees for His Holiness. Apparently it wasn’t necessary, because when I glanced back out at the green, I realized the good saint had scampered back into the open as I started my search, so I followed him over to his next patch of grass, by a maple tree. Raksha also took an interest. 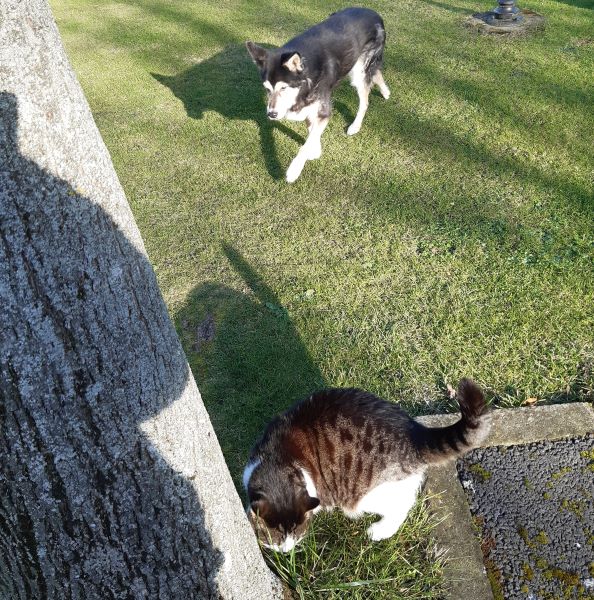 Raksha wandered over to join us

For those who don’t know, Raksha’s about 15 years old now. I got her from a shelter in Indiana in the summer of 2007, and they said she’d been born that March. Since then she’s been with me in Indiana, Wisconsin, New Hampshire, Massachusetts, Scotland, and now Ireland, and I’m pretty sure this is going to be her last stop. She’s needed arthritis meds to be able to walk at all for the last couple years, and she’s almost completely blind in the dark now. I’m pretty sure she mostly just sees general shapes, because this past winter, she thought the wreath the neighbors had hung on the door might be a person a number of times. She also has some trouble with her throat, and I’m getting her checked for kidney problems tomorrow.

All that said, she’s still enjoying life, and interprets most sudden movements when we’re outside as an invitation to play, which is endearing.

The cat is… as he always is. Forever wanting more food, and otherwise generally acting like a stuffed animal. 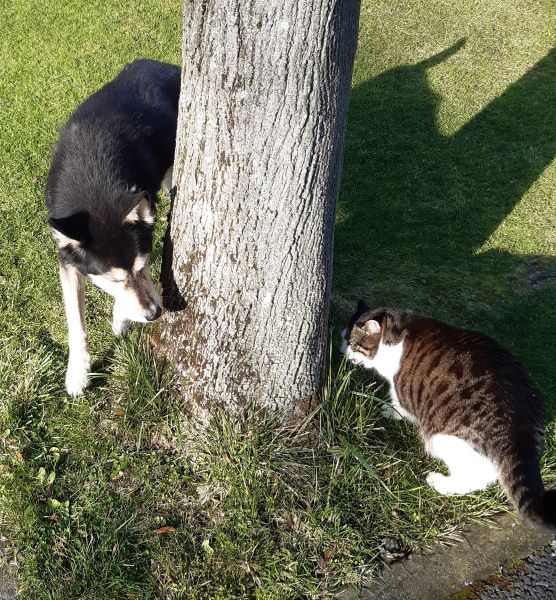 This is the Best Tree, at least for today. Good grass, interesting smells – it’s got everything a tree needs!

I think everybody’s glad for spring. Soon it’ll be warm enough to have the windows open all day, and to spend at least some of my time working outside (It’s a pity I don’t have a laptop, or it’d be more). When that starts, you’ll get to see His Holiness sulking in his leash and harness, because I don’t trust him not to get into trouble while I work, and I definitely don’t trust in his ability to survive as a street cat. I’ve also been training him to come for treats when I play a flute my grandmother left to me, so maybe you’ll get a video of him watching me play as though he actually cares about the music!

As always, if you enjoy the contents of this blog, please consider helping support my work at patreon.com/oceanoxia. My immigration status in Ireland prohibits me from getting a normal job, so for the foreseeable future, this is my only source of income. I am eternally grateful to my current and past patrons, and I’m sure the knowledge of that fills their every waking moment with delight. For just pennies a day, that could be your life!

New drought forecast for the 21st century looks grim. We urgently need to move food production indoors. » « More than surface level: Greenland is melting from the bottom up