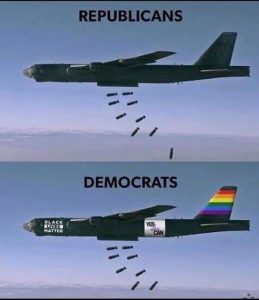 When discussing the two major parties in the United States, people on the far left tend to make the case that there’s little difference between the two. They’re both fairly right-wing parties whose primary disagreements are on how to maintain a global capitalist hegemony, and on how capitalism should be maintained and mitigated within the borders of the United States. This B-52 bomber meme sums up this perspective pretty well – when bombs are falling on you, it’s unlikely to matter how much the ruling party of the country dropping them pays lip service to human rights, equality, and so on. While the U.S. has not been the only regime in the last few decades that’s had a harmful influence, it’s unquestionably the biggest single actor against democracy and human wellbeing on a global scale.

The reason I wanted Bernie Sanders to be president is that while he’s far from perfect, he was the most likely, of the available Democratic candidates, to start working to reduce the activities of the American war machine, and move us further in the direction of a world that stands in solidarity to deal with the issues that affect all of us. It’s frustrating that as the planet continues to warm, and time to deal with that continues to run out, the U.S. is continuing its 20th century project of trying to micro-manage the world, and the global south in particular, for U.S. power and profit. I’m sure there’s a degree to which leaders of both parties believe that American intervention makes the world better, and that the U.S. is, as the saying goes, “doing well by doing good”, but I think that’s a delusion. Decades of intervention around the world have resulted in death, destruction, and chaos, and even assuming the very best of intentions – which I do not believe is warranted – there is zero question that on both environmental and political issues, the world has been getting worse.

At this point, I think it’s worth revisiting Noam Chomsky’s case that, if we were to apply the standards used at Nuremburg, every US president since WW2 would be indicted:

I’m laying all of this out as a preface to making the case that the superficial, absurd “difference” shown in the B-52 meme is actually a difference that matters, when it comes to trying to change this global pattern of U.S.-sponsored destruction in the long term. One of the big lessons of history is that propaganda works, and that it can be used for good or for evil. It’s a slow, system-level tool, and while it can be accelerated by linking it to pre-existing cultural concepts, it requires patience. Engaging in propaganda is the act of adding a concept or narrative into the public consciousness. For the purposes of this discussion, propaganda is the process of mainstreaming.

There are a number of examples of this in American politics (though it’s obviously not limited to that country). As it stands, there’s a default acceptance within most groups of people that racism is bad. This is why we see people – including racists – put so much effort into fighting against the claim that something they’ve said or done is, in fact, racist. That was not always the case, and the change did not happen by itself. It was the process of generations of hard work by non-white activists, with gradually increasing support from members of the majority. Another example is the normalization of the idea that greed is a good thing, and a society organized around individual greed is one that will naturally result in the best possible world for everyone.

Another example is the idea that all humans should have a certain minimum set of rights, that even the powerful are supposed to respect.

And that’s where we get back to the differences between the Democrats and the Republicans. Even if you only focus on the ways in which their policies are similar – or even identical – the language they use matters. Rhetoric is insufficient by itself, but if we lose the mainstream expectation of human rights and democracy, we have lost ground in a major way.  Those of us working to build a more just and peaceful world are playing a long game. We need to have people on board ideologically, and losing even a performative consensus that certain things are good means that we have to spend the time and effort to get that back. Even though the need for change is incredibly urgent, if we don’t take the time to build our new world properly from the beginning, the whole thing is likely to come crashing down around our ears, and at this point that could doom humanity. That does not mean I think we should take an incrementalist approach. Recent history has shown how slow and often ineffective that is. It does mean, however, that I think there’s benefit in paying attention to rhetoric and propaganda, and there are benefits to having even the feeble performance of decency we get from some of the Democrats.

Because even if the people spreading the messages of coexistence, sustainability, peace, and justice don’t actually believe in what they’re saying, many others do. Over time, as those concepts and expectations become normalized, it gets harder for the dishonest politicians to justify their inaction, or maintain their air of piety, in the face of what they’ve actually done with the power we give them.

What we’re seeing from the Republican party right now is this exact process. They’ve spent decades rallying support by vilifying the government, othering non-white people and non-Christians, and treating kindness and fairness as weak, or even evil. And while the degree to which the politicians and pundits actually believed their rhetoric may have waxed and waned over time, it seems clear that belief among those in the base has solidified. With the “Tea Party” movement in response to the election of Barack Obama, it seems that the true believers actually entered the halls of Republican power in a new way. It doesn’t really matter whether the Tea Party politicians themselves believed their message, what mattered is that they seemed willing to actually follow through on the things that conservatives had been saying for generations. The expectation became that America would be “fixed” by moving beyond rhetoric to drastic action.

The same is true of Trump. He promised to move from just implying, or even saying that the problem is “bad people”, and we should just get rid of them, to actually doing it. The base and conservative politicians had to go along with that, or expose themselves as not really believing what they had said. A Republican who tries to hit the brakes on the current momentum of the Republican party is is someone who will soon find themselves ousted from the party, and without any power. The propaganda has overtaken them, and it has moved from being a tool of the powerful, to being an imperative that they must follow. This shift didn’t happen by itself – it’s the result of decades of messaging work funded by those FDR once referred to as “economic royalists”.

The shift towards fascism includes the process of losing even the pretense that democracy, equality, and justice are what we want from society.

As it stands, we have not fully lost that battle. While some Democrats have increasingly embraced “tough” rhetoric in their efforts to appeal to right-wing voters, the party still officially holds good values. It’s unlikely that pushing current office-holders to live up to their stated ideals will be very effective. People have been trying that for longer than I’ve been alive with little success. What we can do is push the general population to replace the disingenuous politicians with representatives who actually care about changing how things are run. As long as we’re dealing with the system that currently exists, we can constantly primary politicians from the left, and work to build collective power to force the changes we need. For that to work, we need people to believe in the goals and standards that aren’t being met.

Because we don’t have the resources of the ultra-rich, we have to bring collective power to bear, and use that to push back against right-wing propaganda, take direct action, and use the electoral system to make what progress we can. The democrats do not live up to their own claimed ideals, and because they still want credit for having them, that discrepancy is a pressure point that we can use to motivate the general public.

Despite everything happening in the world right now, life goes on, and I’m still required to spend money in order to live. My work is supported by a group of wonderful people over at patreon.com/oceanoxia, and I would be immeasurably grateful if you would consider joining their ranks. How much you give, and for how long are entirely under your control, and every little bit helps a great deal, as my household is very short on money right now. Thank you for reading, and take care of yourselves.