The Lynx web browser was first released in Spring 1992 (evidence here), is still in development with a new update sometime this year (v2.9.0).  Lynx was originally made for Unix, DOS and other text-only operating systems, but has also been ported to Linus, MacOS, Windows, and nearly every commonly used operating system. 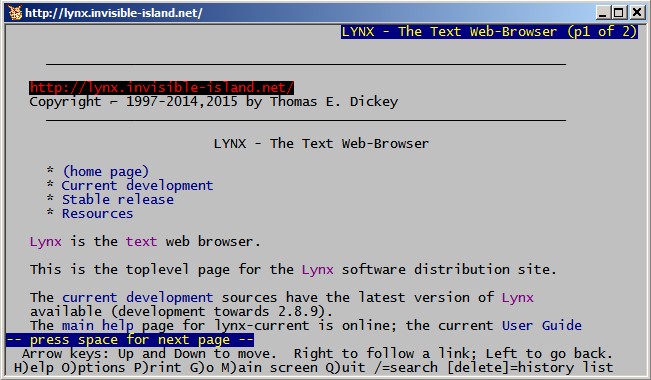 Lynx is ideal for those who can’t use a mouse and want a keyboard operated browser, or they need a text-only brower which can be used with a text-reader (for the visually impaired).  The only problem using Lynx today is website design.

In stark contrast to Microsoft’s desire to force user migration, some people choose to maintain, port, and upgrade software.   The Bert Lance quote says, “If it ain’t broke, don’t fix it.”  It needs a corollary: “If it still works, don’t dump it.”

Where to get Lynx:

And for those who want to try it, Invisible Island has a user’s guide.  There’s also one at the University of Toronto.  But considering how easy and intuitive is Lynx to use, you may not need it.

I don’t use Lynx much these days, but I have great fondness for it.  Back in the 1990s when I was at my poorest (unemployed, on welfare, using a Frankenstein PC), I couldn’t afford paid internet.  I could, however, use my 14.4K modem to dial into the local Freenet, for an hour per day (or more than one between 12am-6am) running Lynx to do it.  This allowed me to browse websites, read Usenet groups, send emails, reserve or renew books at the local library on Telnet, but most importantly, read the job bank at the local unemployment office (hooray for early adopters!) and find the job that got me back on my feet.  I might not be where I am today without the same opportunities.

An Event Worth Noting: Happy International Asexuality Day » « Where The Evil Empire Began: Windows 3.1 at 30