I and almost everyone else in Taiwan has been giggling at these for the last two days.   This is the most adorable thing I’ve seen all month, two Hallowe’en costumes that beat all else.  I’m sure the two subjects were flattered.

First, a little girl with a blazer and a bob haircut, dressed as Taiwan’s president Tsai Ing-wen (蔡英文). 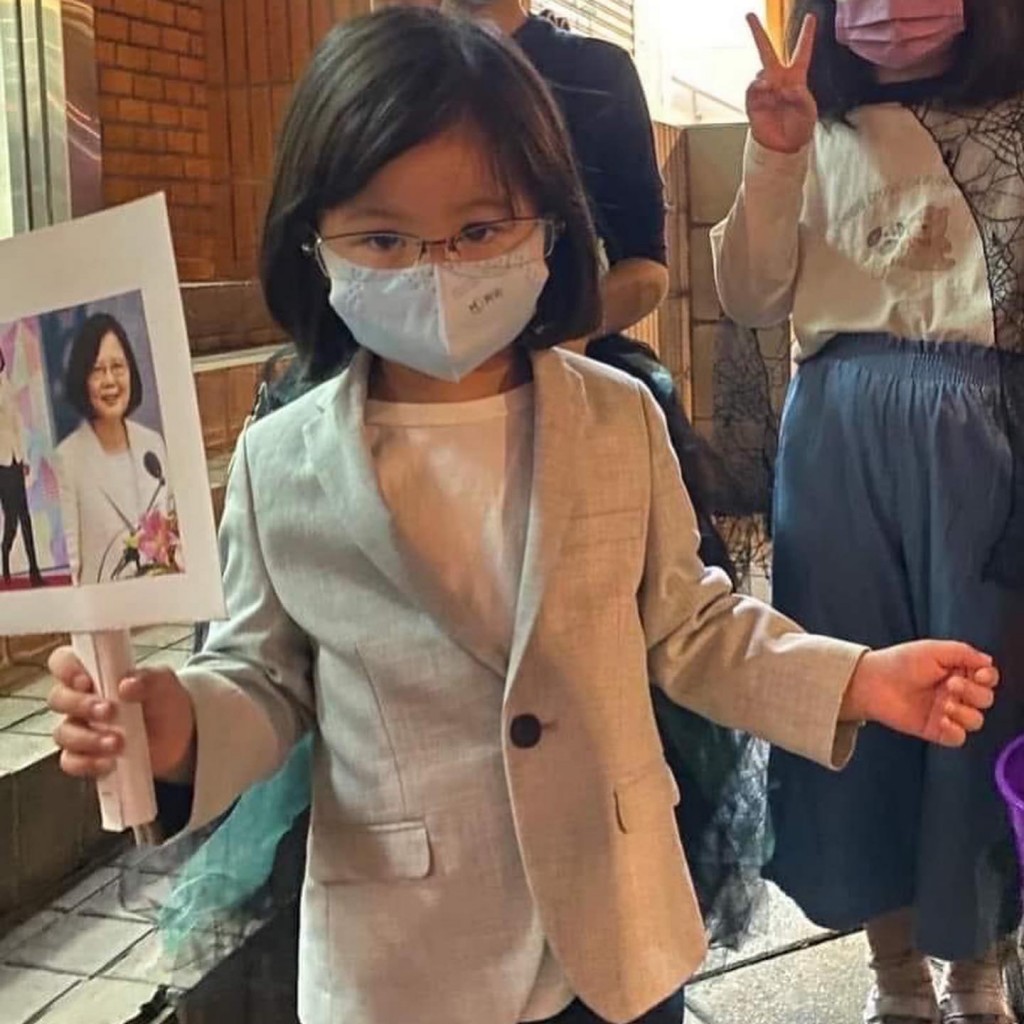 Second, a young lad with greyish streaks added to his hair and a yellow vest similar to those worn by the Central Epidemic Command Center (CECC) went as Chen Shih-chung (陳時中), head of the CECC.  The foam syringe says “Medigen”, the name of the Taiwanese produced vaccine currently undergoing Phase III trials. 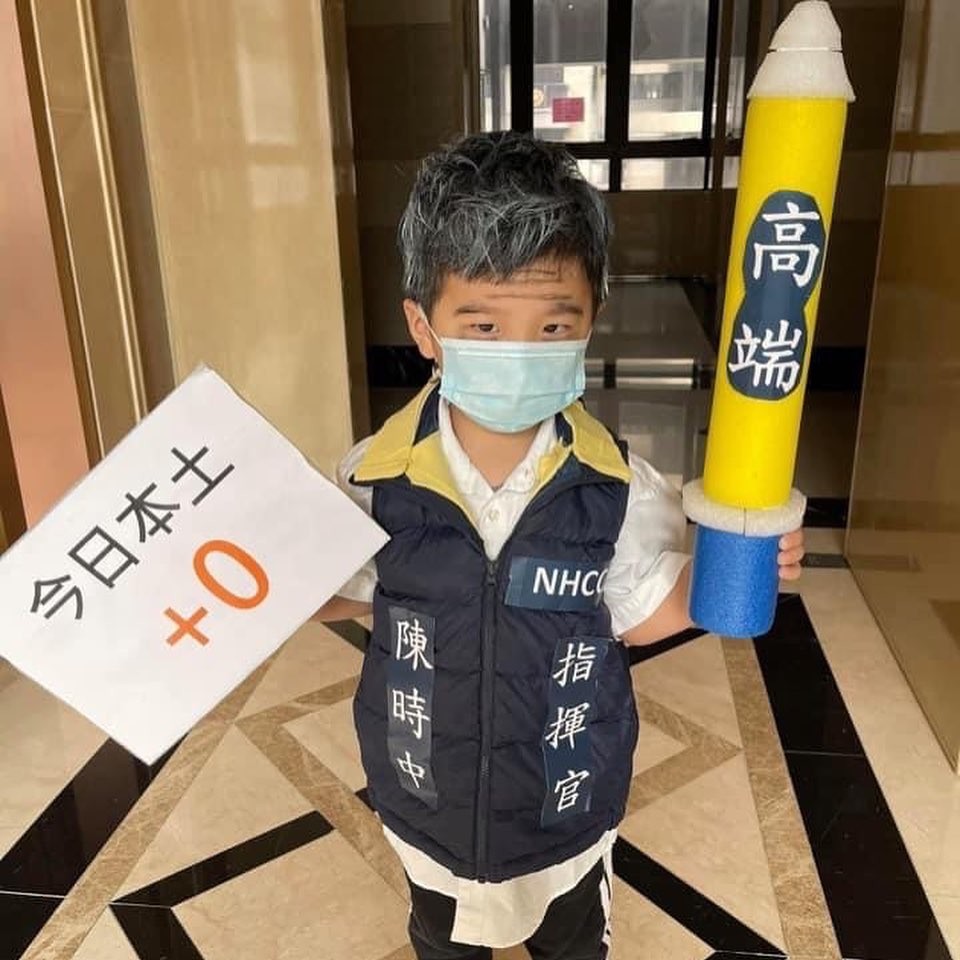 If that doesn’t make you smile, you’re dead inside.

Photos of children dressed as Taiwan’s president and epidemic prevention czar went viral on social media as Taiwanese celebrated Halloween over the weekend.

Although Halloween fell on Sunday (Oct. 31), many of the biggest costume events for kids were held Saturday (Oct. 30), such as the 13th annual Tianmu Halloween Festival in Taipei’s Shilin District and the annual costume party in the Fuzhong Commercial Area of New Taipei’s Banqiao District. On Saturday evening, photos of children dressed as President Tsai Ing-wen (蔡英文) and Health Minister and CECC head Chen Shih-chung (陳時中) quickly went viral.

On their Facebook pages, authors Lisa Liu (劉宗瑀) and Mr.柯學先生 posted photos of a girl dressed as Tsai and a boy wearing a Chen costume. The “Mini-Tsai” was dressed in a white T-shirt, gray suit jacket, black pants, and black sneakers and sported wireframe glasses, a blue mask, and Tsai’s bob haircut.

To make it extra clear who she was dressed as, the child also carried a sign showing photos of Tsai wearing the same outfit. Meanwhile, the miniature Chen could be seen with wisps of gray hair, a furrowed forehead, and the obligatory gray-and-yellow vest worn by all CECC officials at press events.

The boy also held a giant Styrofoam syringe labeled “Medigen,” a reference to Taiwan’s domestically developed COVID vaccine, in his left hand. In his right hand was a sign that read “Today’s local (COVID cases)” and the number zero, representing the long stretches without local cases the country has seen over the past month.

And a side note: here’s my little sister’s costume from last Saturday night when we attended an outdoor party, dressed as Marceline from “Adventure Time”.  (It was organized outdoors because more people were allowed to attend.)  Now I regret not wearing something that matches.  Two other friends were dressed as Finn and Princess Bubblegum.  But there ain’t no way I’m dressing as Jake.

Instead, last Saturday I dressed as Lux Interior of The Cramps, in honour of his 75th birthday. 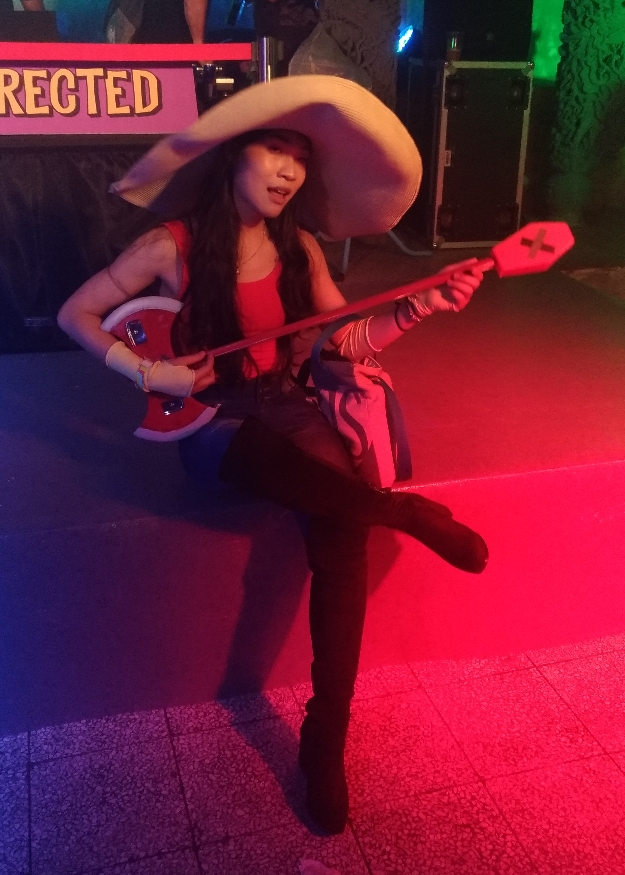 Time To Stand Up: But was I funny? » « There Are Bigger TERFish To Fry: The BBC should be ashamed, but they’re not