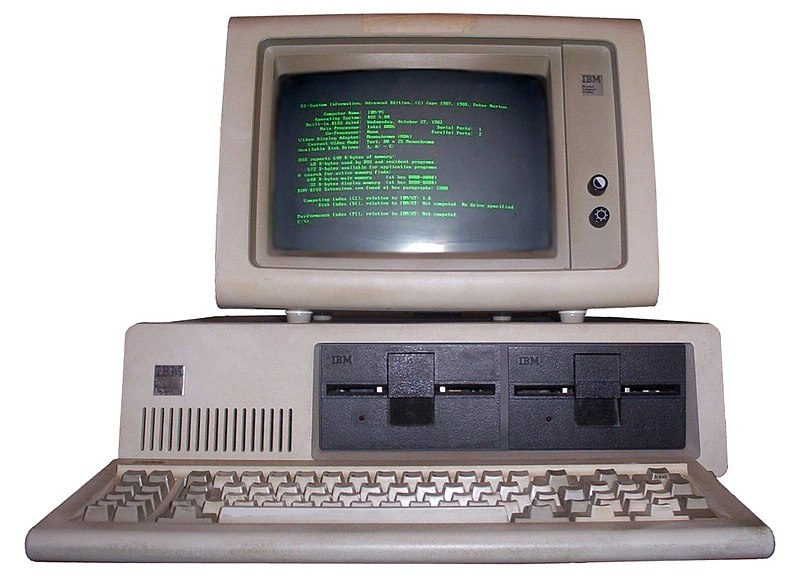 In the late 1970s, DIY computer people saw IBM aka “Big Blue” as an immovable and tone deaf corporate beauracracy.  And in reality, they were, still producing punch card mainframes for corporations and governments.  They weren’t even in the university business, that was primarily Digital Electronics Corporation’s territory.  This is why small business startups like MITS, Apple and Commodore began.  And its why corporations like Tandy/Radio Shack and Atari expanded into home computing, because the future wasn’t just calculators.

When the home computer revolution began, IBM wasn’t in it.  Early companies saw personal computing as the future, wanting to avoid IBM’s deaf ears, inflexibility and mainframe mentality.  And when sales went from millions to tens to hundreds of millions, IBM knew they had to get a share of the market or risk being left behind.  IBM’s chairman Frank Cary snubbed Atari’s offer to build one for them, choosing to build computer that would be seen as a business machine, not a game platform.

Other PC companies had been developing their first and second generation computers for years, so when IBM decided to build their own PC, they were already two steps behind.  It would take years and massive amounts of cash to design and build their own system, so they decided to take a shortcut: their development team, headed by Bill Lowe, took “off the shelf” parts already on the market and proven to work, and put them together, massively reducing developement time and cost.  What would normally take five years, they put together in one.

It would still be their own product and make them a leader in their own market: business PCs instead of hobbyist.  With their established name and distribution system, it would be an easy sell to businesses.  And with operating system and software companies already on the market (Digital Research and Microsoft), IBM didn’t have worry about software development since programs already existed.

Existing PC companies viewed IBM as corporate and institutional, incapable of creating a computer that hobbyists and hackers would take to.  And yet in a strange twist of history, by using ready made parts and keeping the architecture open, allowing users to fix and upgrade it, IBM unintentionally created the hackers’ and hobbyists’ computer.  It wasn’t only IBM’s market domaninance that made it successful, it was its compatibility and openness that won the day.

IBM.com: The birth of the IBM PC

Ars Technica: The complete history of the IBM PC, part one: The deal of the century

IEEE Spectrum: How the IBM PC Won, Then Lost, the Personal Computer Market

One of the most important parts of the story was (depending on who is telling it) why IBM chose the Intel 8088 chip to power the IBM PC.  Most computers of the time used either the MOS 6502 chip or the Zilog Z80 chip.  (Others existed at the time, such as the Motorola 68000.)

IBM chose the 8088 (and 8086) because it set them apart (showing they were a market leader, not a follower of trends) and with 8 and 16 bit buses, the chip offered more power and speed (4.77MHz) than chips that other computers were based on.  It was a case of the right chip meeting all their needs appearing at the right time (1979).

There are three things I most appreciated about the “IBM PC” and its clones, and still do.

First, it’s as open as a 1980s car engine.  If you’re willing to pop the hood and get your hands dirty, you can learn how things work and replace parts yourself.  It’s not an appliance like an Apple computer, where you have no choice about overpriced “service” and forced replacement of a fixable computer (or a crapbox designed to be irreparable).

Second, backwards compatibility.  One can say that maintaining compatibility with older software means less efficiency and progress, but it also means users aren’t forced to abandon software that still works. That’s especially important for companies that built their own software and can’t afford the money to redesign it.  If an accounting system and point of sale system still works in DOS and the OS still works, why spend a fortune building a windows version and have to debug it?

The only limitation on computers these days are disappearing ports (i.e. PS/2, parallel, serial, etc.) leaving only USB, because some hardware and software won’t work without them.  But even that isn’t insurmountable.  Panasonic’s Motto Hairu (“little writer”) USB and CDROM DOS drivers from 2003 still work.  Panasonic only designed them for internal company use, but someone leaked them to the world.  Panasonic has never put a “cease and desist” on distribution of the files.  Here’s a second site containing USB drivers for DOS and windows 3.1.

Third, choice.  As Dan Wood of Kookytech says in his video (seen below), there are more choices of operating system for a PC than just windows, mac or linux.  He lists twelve, and that isn’t even all that’s available (e.g. FreeDOS, EComStation aka OS/2, OpenVMS).  Tim Berners Lee’s original vision of the World Wide Web is that it should work on any computer running any browser.  Why should people be forced to use one or two specific operating systems to go online?

You Have To Wonder: Should the US have copied the East Germans? » « Their Minds Have Gone: And they have lost their census