Anti-Transgender bigots, TERFs and other human garbage are repeating the same failed tactics of prior bigots: Repeating lies in the hope that enough people believe them.  And if one lie doesn’t work, invent and repeat another.  This tactic was used against Black people, jews, women, gay men, immigrants, migrants, the poor, and now it’s being used against Transgender people.  When one lie fails, invent a new one.

A few years ago, “bathroom bills” were all the rage among the garbage, falsely babbling about “Trans predators in bathrooms!” despite no evidence for it.  When anti-Trans bigots like cops admit there’s no evidence, you know it’s a losing argument.

Then came the lie that “Trans women should be locked up with men because they will sexually assault cis women!”  We know why people like politicians and presidential candidates supported this: because some of them wanted Trans women locked up in men’s prisons where they would be abused, assaulted, raped, and murdered.  If they were so concerned about cis women’s safety, why weren’t they advocating separate jail and prison wings for Transgender people?  Why were they denying medical care to Trans people in prisons?

When that didn’t work, “sports bills” came in, pretending that “Trans women would force cis women out of sports! endanger them in locker rooms!”  The lie kept being perpetuated despite no evidence of any “danger” or “threat”.  All they had was fearmongering and “anecdotes” of things that never happened.

The extreme rightwing in the UK, from Boris Johnson’s tories down to the neonazi group “LGB Alliance”, oppose hormone blockers for children claiming they are “too young to decide”.  On top of that, they spread the fiction that “children’s genitals are being mutilated” despite the fact that doctors will not perform surgery on children.  (Unless they’re Intersex kids, of course, then the children’s rights don’t matter to doctors.)

Opposing hormone blockers for under 18 kids is not “concern for children’s health”, it endangers Transgender children.  It means children’s bodies will undergo changes that cause physical and emotional stress – unwanted breast development and unwanted hair growth.  The sadists know that denying health care to kids will increase the rates of suicide amongst Transgender kids, which is exactly what bigots want: more suicides.

Just as the COVID-19 variant spread from the UK to the US, so has the “children’s health” fiction.  Eight US states with republiclown governments (Iowa, Mississippi, and Montana among them) are trying to past “bills” that will deny Transgender medical care to children under 18.  Attempts to legalize and codify hate and violence are likely to spread elsewhere.

Mississippi may ban trans people under 21 from receiving healthcare

From the UCLA School of Law, Williams Institute:

Eight states are currently considering bills to deny gender-affirming medical care to transgender youth. Most of these bills propose to make it a crime or cause for professional discipline for medical providers to deliver gender-affirming care to minors.

Eight states are considering bills to deny gender-affirming medical care to transgender youth, including nearly 17,000 transgender youth ages 13 and up. These states include Colorado, Illinois, Kentucky, Missouri, New Hampshire, Oklahoma, South Carolina, and South Dakota.  Most of these bills propose to make it a crime for medical providers to deliver gender-affirming care to minors or a cause for professional discipline. In two states, Missouri and New Hampshire, parents could be reported to child welfare agencies for facilitating access to gender-affirming care for their children. State-specific estimates of the number of youth at risk of being denied gender-affirming medical care are provided in the table below.

Gender-affirming medical care is recommended for transgender youth by the American Academy of Pediatricians and the Endocrine Society.10 Gender-affirming medical care includes the use of hormones to delay puberty and to promote physical development that is consistent with a child’s gender identity (their internal sense of who they are). A new study published in Pediatrics finds that access to pubertal suppression treatment is associated with lower odds of lifetime suicidal ideation among transgender adults (Turban et al., 2020).

Research shows that gender-affirming care improves health outcomes for transgender people, including youth. A comprehensive review of research on the effects of gender-affirming medical care conducted by Cornell University concluded that access to such care improves the overall well-being of transgender individuals and found no evidence that it causes harm (Cornell, 2017). A study by the Williams Institute concluded that risk of past-year suicide attempts was lower among transgender people who wanted and received gender-affirming medical care (Herman, 2019). More generally, research indicates that efforts to support transgender youth in living according to their internal sense of gender is associated with better mental health and feelings of safety at school, while efforts to change the gender identity of transgender people (i.e., conversion therapy) are associated with suicidality. 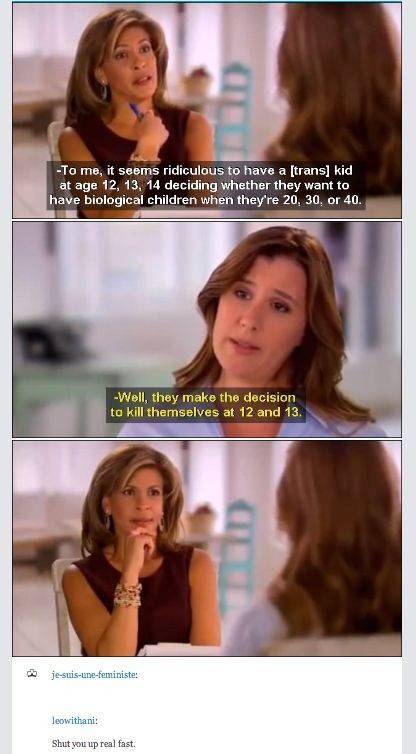 This Sickens: Rightwingnut perverts at it again » « Maybe It Was Too Good To Last: Taiwan has its first mass outbreak