Excuse my delay in posting.  The first week of the school year is madness, as some know.

I read about Chadwick Boseman’s death from colon cancer but didn’t have anything to say at that moment.  I have only heard how the Black Panther film and his other performances affected people, not having seen it myself.  I’ve only seen youtube clips, but I’ll admit he cuts an imposing, handsome and memorable figure.

In the days after his death and reading other people’s words (like the screen capture below), two thoughts came to mind. 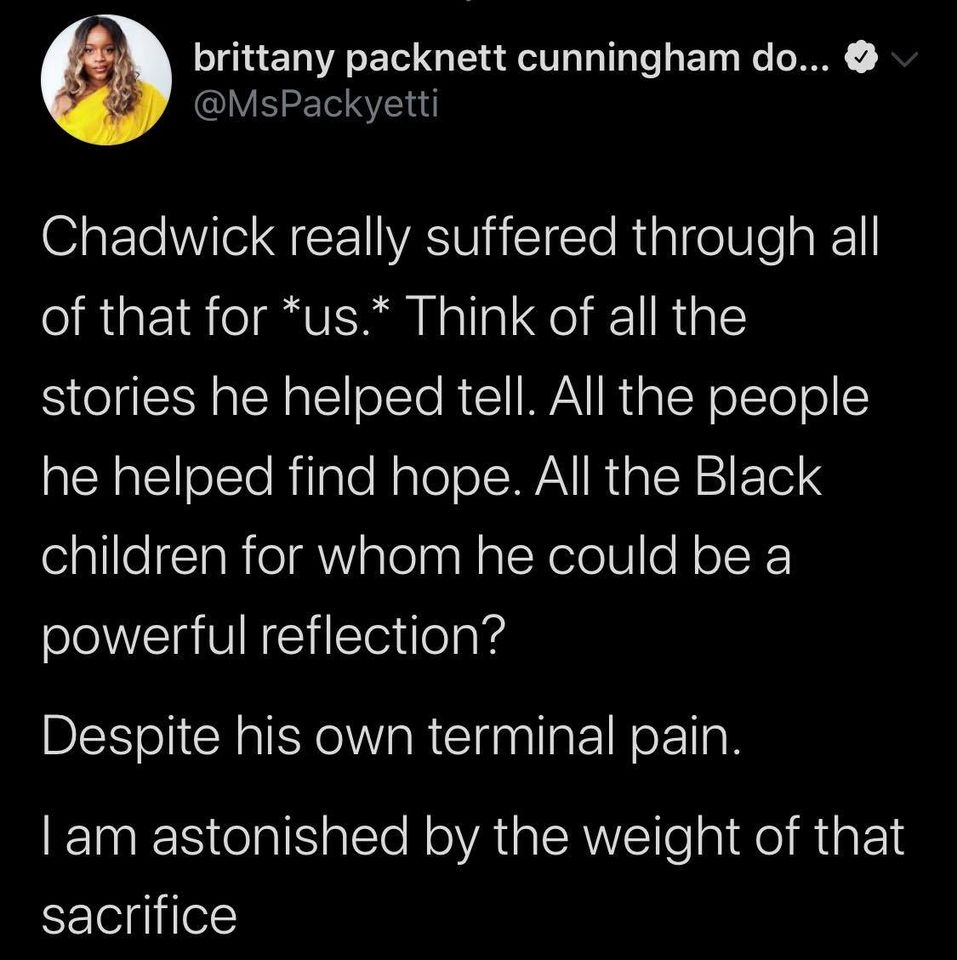 My first thought was about the quality of the medical care he received. We know that Black people are not treated equally by the US medical industry (because it’s not a profession) and how it ignores and deny Black people’s reporting of pain, misdiagnoses and causes people’s deaths.

Maybe Boseman’s cancer was terminal and nothing could be done except delay the inevitable. But if it wasn’t terminal and someone with his money and high profile couldn’t access treatment, just imagine how it is for less wealthy Black people and People of Colour.

My second thought was how some disparaged him as his condition worsened.  I didn’t know he was sick until after his death, but others did, and people used it as an excuse to insult him.  As cancer ravaged his body and left him emaciated, racists and human garbage hurled insults like “crack panther” and other slurs.  Regardless of whether or not people knew he was sick, that’s not something a decent human being does.

Boseman’s death and how scum treated him in his last months reminded me of tennis legend Arthur Ashe and his death in 1993 at age 49.  Ashe contracted HIV during heart surgery in 1983, back when hospitals still weren’t testing blood and most ignorantly labelled HIV/AIDS a “gay disease”.

Though Ashe had the resources to get treatment, this was the early days of HIV when there were few drugs to treat it.  His condition worsened, and in the last two to three years, Ashe looked increasingly gaunt, losing body mass from the strong and lithe figure he used to be.

Human garbage hurled homophobic innuendos, insults, and spread false rumours about Ashe.  Yet through it all and until the end, Ashe continued to carry himself with the class he was known for.