Taiwan’s government issued a strong statement criticizing Tedros Adhanom Ghebreyesus, China’s appointed puppet at the “World Health Organization”.  Or Tedros Adhominem as I like to call him, who claims to be a “victim of racism” because people are talking about the WHO’s incompetence.

This amusing cartoon has been making the rounds today:

Have there been racist comments uttered about Tedros Adhominem from within Taiwan?  Yes, by individuals, not the government, yet he has dishonestly inferred that such individuals speak for the government.  President Tsai has invited him to come to Taiwan, though I doubt he will visit.  He would be subject to a two week quarantine before touring the country, just like any other visitor.

Tsai invites WHO chief to Taiwan amid ‘attack campaign’ controversy

Taipei, April 9 (CNA) President Tsai Ing-wen (蔡英文) on Thursday invited World Health Organization (WHO) Director-General Tedros Adhanom Ghebreyesus to visit Taiwan amid growing controversy over his claim the day before that Taiwan is behind a campaign of personal attacks against him.

“Three months ago, this attack came from Taiwan. We need to be honest,” he said.

Tsai responded Thursday in an English-language Facebook post, writing that “I strongly protest the accusations today that Taiwan is instigating racist attacks in the international community. Taiwan has always opposed all forms of discrimination.”

“For years, we have been excluded from international organizations and we know better than anyone else what it feels like to be discriminated against and isolated,” she continued.

Tsai then invited Tedros to visit Taiwan, where she said he could “experience for himself” Taiwan’s commitment to international engagement and efforts to fight the COVID-19 coronavirus pandemic.

“If Director-General Tedros could withstand pressure from China and come to Taiwan … he would be able to see that the Taiwanese people are the true victims of unfair treatment,” Tsai said, adding that the WHO “will only truly be complete if Taiwan is included.”

The “attack three months ago” he refers to is a Change.org petition.  There are actually two currently active, one supporting Tedros and one opposing him.  Take a guess which has ten times more signatures than the other.  Also, guess the signitors’ nationalities based on their names.

Yeah, a Change.org petition is really going to change things. 9_9 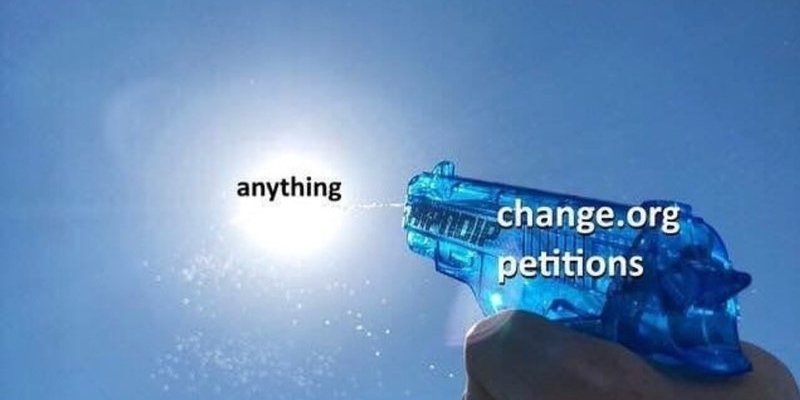 Today the Taiwan government outlined aid it has been giving to Ethiopia for years without fanfare, only mentioning it now because of Tedros’s false accusations.

Taiwan details aid to Ethiopia in wake of WHO head criticism

Taipei, April 9 (CNA) Following accusations by the World Health Organization (WHO) chief that Taiwan has been behind racially abusive attacks made against him over the past three months amid the COVID-19 pandemic, Taiwan’s government responded Thursday by detailing its aid to Ethiopia.

In addition to a stern complaint from President Tsai Ing-wen (蔡英文) and the Ministry of Foreign Affairs (MOFA) earlier the same day, the MOFA-affiliated International Cooperation and Development Fund (ICDF) said Taiwan has helped Ethiopia — the home country of WHO Director-General Tedros Adhanom Ghebreyesus — for many years.

For whatever reasons, the mainland’s People’s Keyboard Army has been pretending to be Taiwanese and “apologizing” to Tedros.  Maybe they’re so used to producing online propaganda that they thought it was necessary. People can probably tell they’re mainlanders not just because of the IP addresses, but also their Simplified Chinese.  Taiwan writes Mandarin in Traditional Chinese.

Chinese netizens pose as Taiwanese to ‘apologize’ to WHO chief

Taipei, April 10 (CNA) Taiwan’s Ministry of Justice Investigation Bureau said Friday that Chinese posing online as Taiwanese are behind an online campaign to apologize to World Health Organization (WHO) Director-General Tedros Adhanom Ghebreyesus, who on Wednesday accused Taiwan of involvement in a series of personal attacks against him.

At a press conference Friday, the investigation bureau said it had uncovered an effort by Chinese netizens to exploit the controversy by falsely identifying themselves as Taiwanese and issuing apologies to Tedros online.

I don’t understand why he’s so upset.  No one is saying the WHO became corrupt when he was appointed to the job.  It was corrupt and wasteful for years before he became part of the problem in 2017.  Misuse of travel funds dropped since he took over.

LONDON — The World Health Organization spent nearly $192 million on travel expenses last year, with staffers sometimes breaking the agency’s own rules by traveling in business class, booking expensive last-minute tickets and traveling without the required approvals, according to internal documents obtained by The Associated Press.

The nearly $192 million is down 4 percent from 2017, when the agency pledged to rein in travel abuses following an AP investigation.

Wilfully Blind: Indonesia is next » « Solitude Soothes: The upside of isolation and quarantine