Another year, another “world championship” game played by the only country with teams.  I won’t be watching, and no, I’m not interested in the “drag queen” ads that will be shown.

What does interest me is seven years ago, Jovan Belcher of the Kansas City team succumbing to CTE, first murdering his girlfriend and then himself in front of his coach.  I want to know what Laurent Duvernay-Tardif “thinks” he will accomplish by playing a stupid and dangerous game instead of doing rounds in a hospital.  I want to know why that “sport” still exists.

Using the NFL’s own pro-reference site and list of players who died from 2010 to 2019 (changing the URL is easily done), I looked at players’ age of death and what positions they played.  Which positions were the most dangerous (there is no “least dangerous”)?

(Excuse the use of the PRE tag.)

It’s horrendous to think that almost 5% of deaths were men under age 40, and 13% were under age 55.  These number can’t be used to calculate a death rate amongst current and former NFL players, because that would require tracking all of them and I don’t have the time or resources.  Yes, all, including those who only played in training camps, since all of them will have played college and high school football.

These numbers would change drastically if you count other decades.  In the past 20 years, NFL tight ends have become receivers, not blockers, so modern players suffer fewer injuries.  Since the 1990s, NFL linemen have averaged over 300 pounds per man.  Mike Webster, the first high profile case of CTE, weighed less than 280 pounds when he played.  There were no 300 pound players in the 1980s.

You don’t have to be an expert in physics to understand F=ma, that when players are larger, stronger and faster they will cause and suffer more injuries.  NFL careers continue to get shorter and shorter due to the number of injuries (source: Wall Street Journal): 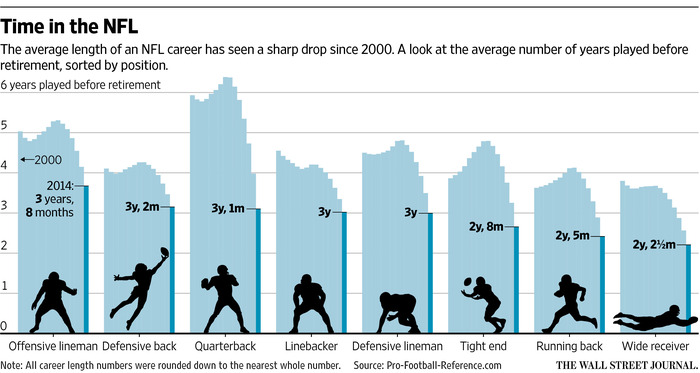 It’s not just shortened careers, either, it’s post-career misery.  Ex-NFL players suffer arthritis at three times the rate of the average US male, along with knee, back, joint and other chronic ailments.  And worst of all, the long term effects of Post Concussion Syndrome.  There are over a dead hundred players whose brains are in jars, proving the effects of CTE, but I worry more about the living.  Le’Ron McClain knows something is wrong with his head, but the NFL ignores him when it comes to liability and doctors don’t know how to treat him.  I fear he is in a long slow decline and will never be healthy again.  I hope I’m wrong.  And he’s only one of hundreds.

A hundred years ago, in 1905, Theodore Roosevelt threatened to ban football because of all the injuries and deaths.  He should have done it while he had the chance, the way many countries banned auto racing after the Le Mans disaster of 1955.  Injuries are so common in touch football (allegedly a “non-contact” game) that helmets are being made mandatory in many places after numerous head injuries.

Life Imitates: Did you know corona is an anagram for racoon? » « Schools Out: This should interesting….