Call me cynical, but I’m in full agreement with Christopher Chan: 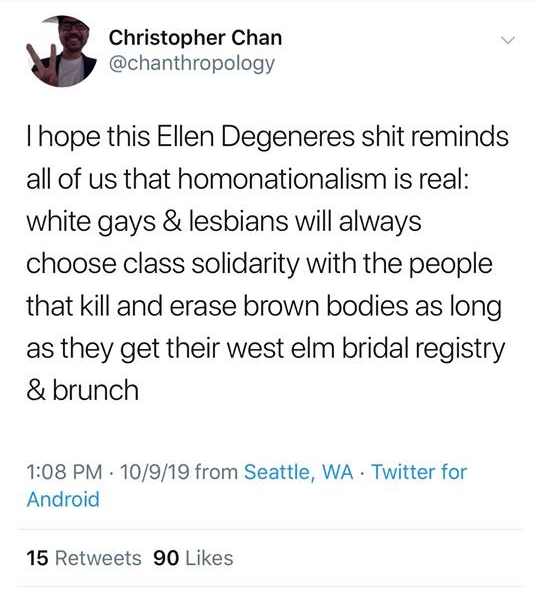 Friday October 11 is supposed to be National Coming Out Day for anyone LGBTQIA.  But predictably, it’s still primarily about those who are white and cisnormative, primarily about gays and lesbians to the exclusion of other sexual, gender or racial minorities.

The treatment of Black Transgender women at Stonewall 2019 is proof of that.  Ellen Degeneres palling around with unconvicted war criminal George Bush and blathering about “kindness” is sickening.  Pete “the gentrifyer” Buttigieg shrugged when he was called out for failing to hire any Black cops in a city where they are 26% of the population.  Just like first wave feminists and first wave “new atheists”, they serve their own interests, blaming others for “divisiveness” while engaging in the divisiveness of segregation.

They. Are. Not. Allies.  If people are not Intersectional and supporting others in a meaningful way, if they are associating and pandering to those who foment hate, then they are of no value to me.

I refuse to carry or walk under that six colour rainbow “whites people’s flag” that it has become.  At the Pride Parade on October 26th, I will walk under the Transgender flag and my own flag.  I also plan to carry signs that some around her won’t like (e.g. criticism of SWERFs and TERFs, unreported sexual assault).

As for my own coming out, I am out to pretty much everyone that matters to me with two exceptions:

(1) People from my past whom I haven’t yet found and contacted.

(2) My students and their families. The school won’t let me work as a woman.

I’m fortunate that I can do that.  Many here still have to hide their sexual and gender orientations, unable to marry because of family pressures, despite having the legal right to do so.

Face Off: Eighteen years in Asia, and I still don’t understand the concept » « I Mildly Disagree: Sometimes, sexy costumes are good, part 2