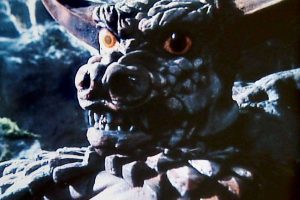 Specifically, I’ve realized that I think of any movie is to sort them into or out of three overlapping categories, and I mention this because I think most critics tend to collapse these into a single set: “Good”, “Fun”, and “I Liked It”. I’m going to talk about the difference a little, and then tell you what the truly amazing monster in the attached picture is. If, like me, you have a taste for the awful or absurd, I think you will need this guy in your life.

“Good” films are ones I think of as quality examples of the craft. A story with a meaning in it; good performances, good production values. Sometimes, but not necessarily Oscar-bait. Since I am a writer who cares deeply about the narrative, to me the story is paramount, and a well-acted well-made film with a shoddy or cliché story is not going to be Good. Whether a film is Good is not defined by genre or even the people in it; for example James Cameron directed and Sigourney Weaver starred in Aliens, which is good (unusual at the time premise, very rare example of a female action hero, highly memorable script), but also Avatar, which is not (generic story; worse a problematic story about how a colonist is better at ‘being a native’ than the natives; it’s blue cat people Pocahontas).

An objection one could raise is that Avatar is at the moment the second highest grossing film of all time, to which I say… that is irrelevant. “Successful” would be a whole fourth category from these three, and unlike the others is determined by cold hard numbers and doesn’t have any use for a critic.

“Fun” movies are ones that are enjoyable to watch on an emotional level. Satisfying, exhilarating, and/or hilarious, to a reasonably large proportion of its audience. Serious deep dramas rarely land here simply because it’s hard to be Fun if you are exploring uncomfortable topics; meanwhile any competent animated film is virtually guaranteed to be this just by virtue of the visual gags inherent in the genre*. Despicable Me is Fun and Good; Indiana Jones and the Temple of Doom is Fun but not Good; Boys Don’t Cry is Good but not Fun; and Trespass (2011) is neither Good nor Fun (it is in fact the most boring ‘thriller’ I have ever seen, do not watch this). Fun is also the category that “so bad they’re good” movies fall into unintentionally, more on that below.

I think it’s pretty clear what this means. This one is entirely about my tastes and what speaks to me, and no, it is not a circle with either of the others. Tangerine is Good, but I did not ultimately like it (it’s a harsh, emotionally raw movie, with a lot of circumstances I simply found very uncomfortable, but it is very Good and I’m glad I saw it); Minions is Fun, but ultimately left me kind of cold†.  I’ve racked my brain and I’m not entirely sure if there is anything I liked but did not consider either Good or Fun; the closest would be M. Night Shyamalan’s The Village which is just so fundamentally almost everything that I can’t decide for sure whether it was Fun or Good. Conversely, knowing what a lot of people got out of it I have to consider Frozen II Good, at least technically, and it had enough comedy to be Fun, but I found it rushed and not quite committing to being what it wanted to be, so I didn’t like it. The seams were too visible.

Unsurprisingly those last two examples were a lot harder to think of than the others. Of course normally anything I like is going to be something I consider at Good and/or Fun!

One thing I love, however, is anything – and I do mean anything, this applies obviously to movies but also books, art, and even restaurants – that is so bad it’s weird as well, and winds up hilarious. This always has to be unintentional; genre-savvy weirdness like Sharknado can be silly and fun in their own right but those parts of it that try to emulate ‘so bad it’s good” always fall flat, because there’s too much of a “wink wink” feel to it. So Bad It’s Good must be an earnest effort, a truly legitimate attempt to bring a creator’s vision to life, which proceeds for whatever reasons to go completely off the rails and then got released anyway. Some movies become legendary for this, such as Santa Claus Conquers the Martians, Ed Wood’s magnum opus Plan 9 from Outer Space, and of course Tommy Wiseau’s improbable career launcher The Room**. I have seen all of those and couldn’t possibly recommend them more, they are absolutely rib-crushingly funny with no desire to be so.

Which brings me to the monster pictured above! I have recently read (well, listened to) the book “A Kim Jong-Il Production” by Paul Fischer. This book was excellent and I urge you all to check it out; it the true story of the North Korean abduction of director Shin Sang-ok and producer/actress Choi Eun-hee in 1978 and the films they made for Kim Jong-il before their eventual escape. Most of these films were pretty good and did at least reasonably well on the film festival circuit behind the Iron Curtain and tolerably well on this side of it; they were of course complete masterpieces by the nearly nonexistent standards of North Korean filmmaking at the time and fantastically popular within the regime. The last one, however, was… different.

According to the book, the inspiration for this came from Kim Jong-il’s love of Godzilla, except it wasn’t the original Godzilla he loved but the much more recent and questionable The Return of Godzilla. So Shin Sang-ok co-created for him the deeply strange monster movie Pulgasari, in which a small child accidentally brings a figurine to life as a giant scaly dragon-monster, it crushes the local oppressive regime, then grows out of control itself and has to be defeated by the people. To this day arguments rage over whether this is firmly inline with North Korean ideology or – because of the monster becoming dangerous – whether it is a severe criticism of the same made using the regime’s own resources. When asked, Shin Sang-ok said it was ‘just a monster movie’. The book, however, compares it directly to all three of the legendarily bad movies I mentioned above, and says it is truly deeply bad in a way that only earnest attempts at horror and drama can be.

So what we have here, reportedly, is a movie as magnificently terrible as The Room, which is also a rubber kaiju movie, and most incredibly of all a North Korean monster movie actually produced by Kim Jong-il. I have not seen Pulgasari yet, but I have found it, and I am very very much looking forward to seeing it as soon as I can. I had thought it would be hard to find, but on the contrary the entire thing is on Youtube complete with English subtitles. If you watch this, please please comment below!

* I know animation is a medium, not a genre, but I am referring here to Western animation. The vast vast majority of Western animation, CGI or otherwise, is a comedy in one way or another. Has there even been a CGI animation that is not at least half comedy since Final Fantasy: The Spirits Within?

** Not to be confused with the 2015 multiple-award-winning Room, which I have not yet seen, but can vouch the book it was adapted from was excellent. I highly recommend the book for anyone interested in highly emotional drama, but it is a difficult experience. Actually, these casual searches turned up at least three movies called “Room” and two called “The Room” (also the name of one of my favorite puzzle game franchises), so perhaps it’s time for people to… not use that name any more? It’s kind of a lot now and… how could these people not know they were setting themselves up to be always mentioned in the same breath as Wiseau’s?