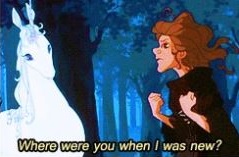 “The Last Unicorn” is a 1982 animated feature produced by Rankin-Bass based on the eponymous 1969 book by Peter S. Beagle. It is a quirky, slightly deconstructionist high fantasy musical that stands a good chance of breaking your heart.

This one is a personal sharing as more than a critique proper, but then, I tend to think the truest “critique” of art is how we respond to it. 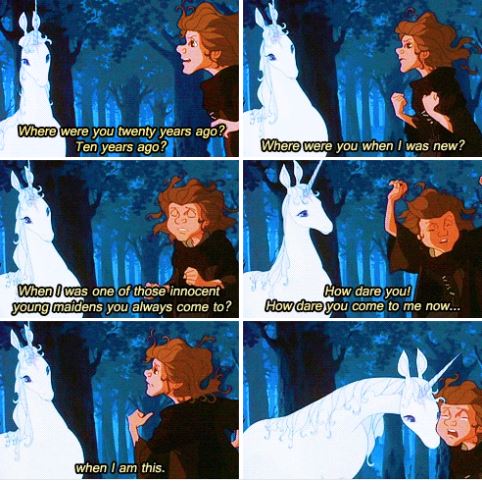 I have a running joke about how I hate unicorns. I don’t really, though they are rather over-played these days and I do have a history of being screwed over by them (that is another story).

But this… I feel this. I feel this in my heart, in my bones. Deeper than that – in my mitochondria if you can feel things there. I saw a lot of magic granted to others, then faded and gone for a long long time; decades even. And when a unicorn of sorts came to me at the end of 2016 I was already old.

I lost that too, I wasn’t ready for it. Now I don’t have a unicorn. Don’t get me wrong, there are other magics, and I am deeply grateful for everything I DO have now…. but still, but still…

I am luckier than Molly. I have a strange feyness of my own, and I am young for my age where she is old. I have more time now than she did, and I am not relying on just one magic from someone else.

That’s the real lesson. The tragedies of “The Last Unicorn” are Molly Grue and King Haggard, who had the same affliction: an aching hole in their souls, a desperate yearning for the missing magic. Molly merely waited for it, and took up with the wrong people whose claim to magic was a lie. Haggard stole it, ruining others’ lives in a desperate bid to un-ruin his own. Molly, ultimately was lucky, and Haggard not… but they were both wrong.

You have to make it.

You CAN make it.

And that lesson was my unicorn more than anything else. I can do this? Now? When I’m already old…? Where were you when I was new?

I forgive you*. What else could I do? Scream about the relentless march of time? Waste what time I have left with lamentation? Cry that it’s too late, until it really is?

No, I won’t waste what blessings remain, or the hard-won lessons. Better yet, I want to pass them on. Help me do that. Tell everyone, tell yourself… you can neither wait for magic nor steal it, you have to make it. And you CAN make it. And you should.

So I will. And who knows, maybe someday yet another unicorn will come to Abbey Grue.

* As, ultimately, so did Molly. Her last line in this scene, after the pictured part, was “It’s all right. I forgive you.”

[This is an updated version of an article originally posted to Facebook on Oct 7, 2019]