One of the chief arguments pressed into service in defence of so-called “casual” racism – that is, racism that occurs as part of popular culture without any awareness of racist content on the part of the majority – is that in the absence of intent, acts are not racist. While we here know this to be largely a fiction born of self-flattery, it is surprisingly persuasive and popular. It’s not exactly a difficult puzzle to solve – if you have not had to deal with the consequences of racism in your own life, you’re unlikely to have much appreciation for the myriad ways in which it manifests itself and exerts its influence.

The close cousin of the intent argument is the “well that’s not what it means to me” argument. When someone uses racist imagery in this same “casual” way, either out of apathy or ignorance, the typical response is for the person to say that ze simply doesn’t see it as being racist. This is often the case for things like blackface or cultural appropriation from First Nations – it’s not racist, it’s like, totally meant as a compliment! Or it’s completely blind to the culture from which it’s taken. I’m honestly not sure which is worse.

What I do know is that some explanations are more bafflingly clueless and indefensible than others:

I’ve seen a few Confederate flags here in Canada, and I’ve always struggled to interpret it as anything other than a statement of “if I could get away with it, I’d kill a black person”. Various attempts to divorce the flag from its history have been made, but the fact is that there was once a country whose chief raison d’être was the perpetuation of a kind of slavery that had been outlawed by the country it sought to secede from. The “stars and bars” was the flag of that country – a visible symbol of what it represented. Beyond that it was used as an official symbol for white supremacy and White Power for decades after Reconstruction (one might even argue that it is still used as that symbol). If you want to wear that symbol, you have to be aware of its history.

Of maybe you don’t:

At the sprawling school parking lot, marked by pickup trucks and snowmobile tracks, most students were angry the administration was intervening in what they choose to wear or accessorize with. Some students in the town on the east shore of Lake Simcoe said the display of the flag wasn’t widespread, and many debated its meaning.

“It’s more about the country values, we don’t think of it as racist,” said a Grade 10 student, who has T-shirts, belt buckles and hats with the symbol, and plans to keep wearing them.

“Country values”, he says. I think he’s confused about which country.

It is interesting to note, just as a matter of geographic and historical fact, that Barrie Ontario (the nearest city to Sutton District High School) was once the home of the largest Ku Klux Klan detachment in the country. While I’m sure the students had no idea this was the case – nor did I until I read the Backhouse book – I have a hard time believing that the parents of these students are quite so blissfully unaware of the racist connotations of the symbol, and the history of the region when it comes to white supremacy.

There was another bit of this interview that caught my eye, and provided the title for this post:

Standing on a big pile of snow in Sutton District High School’s smoking area, Grade 12 student Cody Ley said he sees “Southern pride” when he looks at his Confederate flag lighter. He said the rule is “pretty stupid” since people have freedom of speech.

Let’s assume for a moment that “Southern pride” isn’t the same thing as “white pride” for a moment (although, in the context of that symbol, it absolutely is) and ask Cody a question: 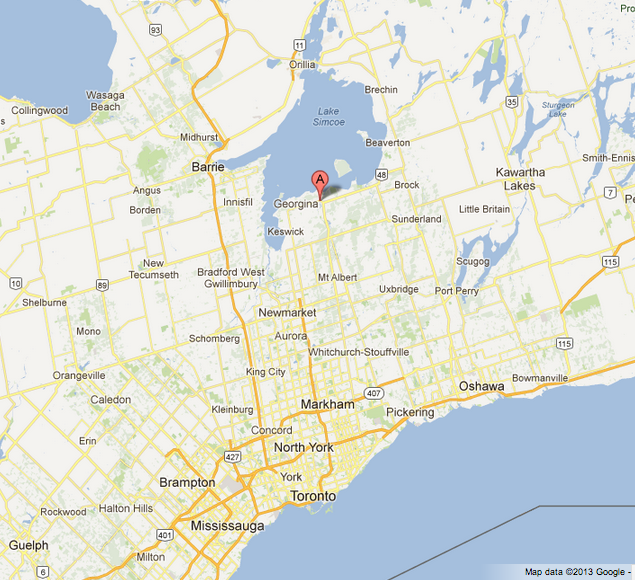 What exactly is “Southern” about where you live? It’s “south” of Lake Superior, that’s certainly true. And hell, the great city of Bracebridge (population 15,000)  is quite a bit north from you, so I guess there’s that. But most of the black people live in that giant sprawling Metropolis that’s directly to the… gee, would you call that ‘south’? So what exactly about your completely not southern-ness do you think is accurately expressed by using the flag of the Confederate States of America?

Cody and his classmates are at the weird age where I’m not sure if I feel comfortable blaming them for their ignorance, or even chastising them for it. What I will say is that, as much as they would clearly prefer to, the history of a symbol like the Confederate flag cannot simply be stripped out and made generic by the lazy inattention and historical illiteracy of high-school students in sort-of-rural Ontario. And as it is for them, so too is it for any group of people who want to try and “reclaim” or otherwise “subvert” symbols and behaviours whose histories they don’t know and haven’t tried to understand.

Maybe the words of a classmate of Cody’s can sum it up more pithily:

“You can buy a f—— swastika if you want, it’s still racist,” said a student walking by.