Part of the reason I have such a difficult time taking complaints about the “persecution” of Christians in North America (and indeed, most of the world), is because by degrees they demonstrate again and again that they have simply no fucking clue what persecution looks like. To wit:

Jamaica’s public transport authorities have banned lay preachers from addressing commuters in public buses. Jamaica is a predominantly Christian country, but many passengers have complained about the noise and disturbance. Drivers have been instructed to politely warn religious ministers that they are no longer allowed to evangelise fellow passengers. Preachers say the decision infringes freedom of speech and religion.

No, Jamaican dickhole priests, your rights are not being infringed because people are telling you that you’re not allowed to push your superstition to people riding the bus, on their way to actually doing something worthwhile in the world. Your rights are intact. You can still say whatever you want, you’re just not allowed to do it with absolutely no regard for the feeling or comfort of other people. You know, like a non-sociopath.

I am reminded of this comic: 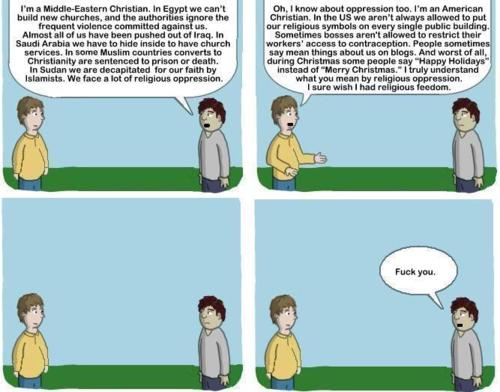 Of course, I’m also reminded of this image: