One night many months ago I was poking around on Twitter and was alerted to the now-notorious Love Letter to Creeps penned by Mallorie Nasrallah. As I was participating in the resulting fracas, I crossed swords with skeptic, magician, and broken record Penn Jillette who, in response to my attempting to clarify exactly where the problem was in Mallorie’s letter, sent me this bizarre tweet: 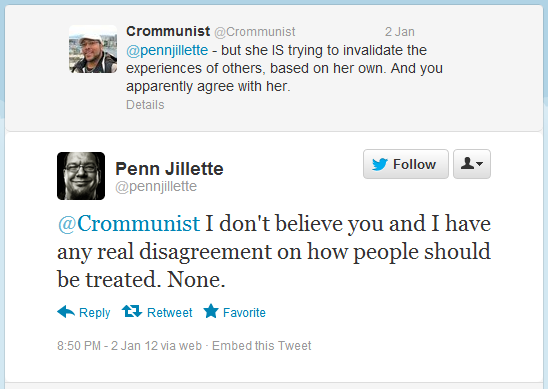 Me: but she IS trying to invalidate the experiences of others, based on her own. And you apparently agree with her.
Penn: I don’t believe you and I have any real disagreement on how people should be treated. None.

Confused by this seeming complete non-sequitur, especially since we did disagree, I pressed the point: 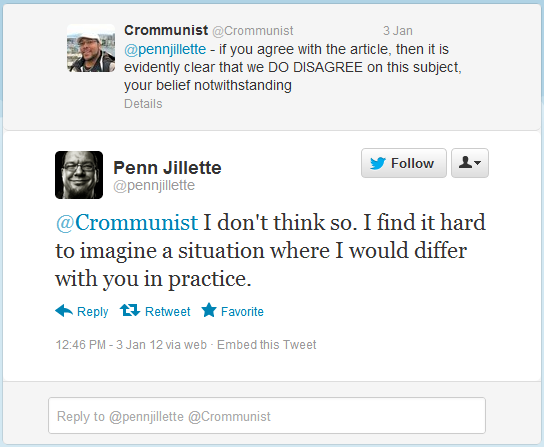 Me: if you agree with the article, then it is evidently clear that we DO DISAGREE on this subject, your belief notwithstanding
Penn: I don’t think so. I find it hard to imagine a situation where I would differ with you in practice.

Baffled as I was by the attempted Jedi mind-fuckery, the conversation very quickly devolved into nonsense.

This line of attack resurfaced a couple of weeks ago, courtesy of commenter keithroragen:

Isn’t it possible for people with so much in common to disagree over an issue without being a-holes about it. You are all a bunch of sanctimonious navel gazers. I can’t believe anyone goes to these conferences in the first place.

My reply of “LOL” was all of the effort I felt that this complete nonsense deserved, but as it so reminded me of Penn’s weirdness, I figure it might be worthwhile taking this meme on, in case someone happens to mistake “but you agree on the important stuff; you shouldn’t fight” for a legitimate and worthwhile position.

First of all, this is emphatically not a substantive response to anything. If anything, it is a tiresome attempt to derail an actual dispute. It is completely meaningless that Penn, Thunderf00t, and I agree on how we would like people to be treated (if that is the case, which I dare say it is likely not if they believe that harassment at meetups is not something worth the effort of addressing). We are not talking about the 99% of things we agree on – we are talking about a specific issue about which we have emphatically different ideas. This conversation is in no way advanced by behaving as though we don’t disagree, or that this particular disagreement is unimportant. As I’ve said from the beginning, pretending that a problem doesn’t exist is not a resolution to that problem – it only serves the status quo.

Second, the exact same assertion could be made about any disagreement. We are all carbon-based bipedal primates. Why should we fight about something as silly and unimportant as religion, or politics, or the necessity of war, or [fill in issue worth discussing here]? Can’t we all just focus on what we have in common and get along? Well… no. Some issues deserve discussion and debate, and just because you don’t happen to think the discussion is worthwhile is not a valid reason not to have it. And that’s all this statement really is: the whine of someone who thinks that energy is being wasted on ‘unimportant’ things – meaning things that the whiner doesn’t find personally relevant.

Finally, and perhaps most importantly, I really do have to question how much I really have in common with someone who believes something this stupid. I may have arrived at a similar conclusion to Penn vis a vis atheism and pseudoscience. I certainly share Thunderf00t’s contempt for creationism and his joy for the advancement of legitimate empirical worldviews. We do share many important beliefs. That being said, to say that we have ‘so much in common’ is a really selective view of the things that are important to me in my life.

As I said to Penn, I’d be willing to bet that when it comes to issues of how to treat other human beings, I have more in common with Shelby Spong or the Dalai Lama than I do with Penn Jillette. This despite the fact that both Bishop Spong and the Dalai Lama are people whose god beliefs I find ridiculous and whose overall view of the nature of the universe I do not share. That being said, given that how we treat other human beings and the importance of recognizing the need to improve the way we treat minority groups, it might be fair to say that I don’t really have that much in common with anyone who disagrees with me on something as clear-cut as how we respond to complaints about sexual misconduct in atheist/skeptic spaces.

Of course this should not be confused with a statement like “your positions on this are actually the same”. It is possible that two people don’t realize they’re saying the same thing, but with slightly different wording (this happens often, especially on Twitter). Oftentimes those involved in heated debate are responding to what they think the other person is saying, and can end up talking past each other whilst holding the same beliefs about the topic under discussion. In that case, it is simply a matter of identifying the commonalities between the positions, rather than simply asserting the equivalence.

Of course the real solution to this ‘commonality’ conundrum is to recognize that the statement “you shouldn’t fight with those with whom you have so much in common” lacks any and all validity as part of a discussion on any topic. If two people care enough about a subject to discuss it from opposing positions, then they are the sole arbiters of whether the difference is meaningful. Yes, we agree on a lot of things, that’s certainly true. However, we disagree on this, which is why we’re discussing it.