“If your jokes or teasing manner offend some people, so the fuck what? Someone will always be offended by jokes, never let them make you believe that you are guilty of something worse simply because of your gender. If you want to make boob jokes thats fine by me, you have after all been making dick jokes since you were old enough to make jokes.”

These excerpts from an insipid, fulsome love letter to the skeptic/atheist community were enough to inspire a bout of epic eye-rolling when I read them last night. They were enough to motivate me to wrangle with Penn Jillette via Twitter for his promotion and support of the message contained therein. They were enough to push me to forward the letter along to the rest of the FTBorg, as a sort of “hey take a look at this dummy” thing. They were not enough to spark an entire blog post. After all, if I swung at every pitch, I’d burn out too quickly to fight the battles where I thought my participation could make a positive difference. I was happy to let those with stronger feminist street cred take the lead on this particular one.

It’s distressing, obviously, to see someone completely dismiss the experiences of others simply because that person has had a nice experience. The argument from myopia is a common one in discussions of privilege – “I haven’t seen it, therefore it’s not a problem”. Considering the sheer number and variety of examples of the marginalization of women in skeptical communities, it seems particularly tone-deaf to simply wave it away because you like dick jokes. I like dick jokes too. But there’s a way to craft sexual humour without being sexist, and this line is often crossed at the continued expense of female skeptics. We’re getting better, but work still has to be done. But again, I figured I could rely on my confreres at FTB to make the necessary arguments, and I could focus on getting my stride back after vacation.

Then I received this: 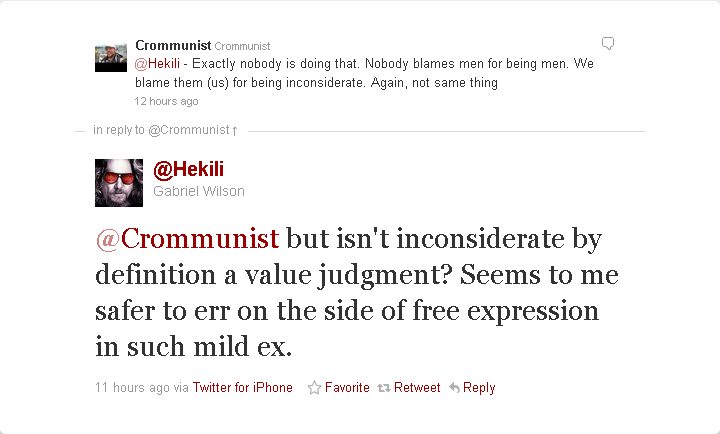 @Crommunist but isn't inconsiderate by definition a value judgment? Seems to me safer to err on the side of free expression in such mild ex.

Pro tip: when decrying someone else’s “value judgment”, you might not want to call the repeated negative experiences of a wide variety of people “mild”.

So now I feel as though this discussion needs some more unpacking, because evidently the point is not so obvious as I thought. First, I need to put a stake in the heart of the weasel-out argument that is being marshalled in defense of the original piece. This was not a letter to one particular group of people. There is nothing in the letter to suggest the author is at all aware that there is a serious issue of sexism in the skeptical community at large – nothing that says “I know other people have had a rough time, but the people I’ve met have been very nice to me, so congrats on showing greater insight into your actions”. This is not a letter that says Las Vegas is doing it right, or that she personally doesn’t have a problem. It is a letter that says, quite explicitly, that people have been telling men to treat women as delicate fragile flowers, that men are called awful assholes (simply because they are men), and that nobody should feel it necessary to alter their behaviour one bit (unless they’re the complainers, in which case kindly STFU).

You have never been anything but awesome and welcoming. Who made you think you weren’t?

Which is about as explicit a statement of “I have not bothered to try and understand this issue at all” as you can get without just saying it verbatim. The answer to that rhetorical question, by the way, is dozens of prominent female skeptics who have been fighting for years to have their voices listened to instead of ignored or explained away as being “overly sensitive”. The fact that the author doesn’t understand that goes beyond simple laziness – it is a refusal to even make an honest attempt to understand the criticism of your position before dismissing that criticism in a flurry of straw men.

As to whether or not this is an issue of free expression – whether it is better to err on the side of the status quo because the marginalization of the minority is “mild” – I can only take this back to my earlier conditional argument about increasing diversity. Do we want women to feel more comfortable participating? If the answer is ‘no’, then embrace that – “tough shit ladies, if you want to roll with the big boys, grow some thicker skins.” I doubt this is the majority view. If we do want to see increased female participation (or LGBT participation, or PoC participation), then we have to learn where the barriers to participation are. One such barrier, the issue of how women are treated in skeptical communities by men, has been identified several times. Unless someone wishes to make the claim that we’ve already made all the necessary adjustments to remove this barrier, then we cannot simply ignore the problem until it goes away.

This is an argument that has literally nothing to do with free expression. Men in the skeptical community are free to say whatever they like to whomever they like. They are not, however, free to do so without any social consequence. If women consistently face sexist humour, and if their complaints are met by “it’s just jokes, don’t get your panties in a twist”, I can’t imagine they’d want to stick around. The author of the piece doesn’t appear to be bothered by that kind of interaction. Good for her. Similarly, I know lots of black folks that like cracking racist jokes with their white friends. I’m not one of them, and when people try that shit with me, they hear about it. If they refuse to recognize that the problem is not with me for being “too sensitive” about the serious racist climate that those kinds of jokes prop up (but rather is with them for exploiting that climate to get a cheap laugh), then I’m not going to waste my time and energy trying to dynamite a passage through the mountain of their ignorance – I’m just going to avoid them.

The author of the letter has had a positive experience. I am tempted to think, because of the way she talks about sexism, that her experience has not been sexism-free, but that she simply doesn’t care. Other people do care. A lot. And to tell those who are too steeped in the laziness of the status quo (and the few who are overtly anti-feminist) that they are licensed to ignore the suffering of others simply because not every single person sees it as negative is nothing that anyone who cares about increasing diversity in our community should agree with. I am not so naive as to think that this one post is going to completely explain the multitude of reasons why the love letter was wrong – this is a conversation we apparently need to keep having, as depressing as that might be for those of us who aren’t being listened to.