People are so nice. 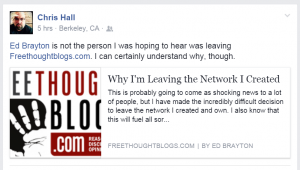 Ed Brayton is not the person I was hoping to hear was leaving Freethoughtblogs.com. I can certainly understand why, though.

Update: adding a poignant public post from a network colleague:

[Personal problems blah blah] I know there’s some shit going down on our blog network that I need to address, and I will once I’ve found enough spoons. I know a lot of my readers are hurting right now. Please let me know if there’s anything in particular you need me to do to help you. Unless you want me to join Ophelia’s pity party. That I cannot do.

This isn’t a pity party I’m having. It’s a disgust party.