This is from April. I didn’t see it then. I’m glad I didn’t – I was freaking out enough as it was. It’s the Daily Mail:

There is no hint of fear in her eyes as feminist writer Taslima Nasreen tells Mail Today that Bangladeshi terror group Ansarullah Bangla Team is plotting to cross over to India and then travel to the Capital to kill her.

The group takes its ideology from Anwar Al-Awlaki, a Yemen-based al-Qaeda activist, and has been involved in the murders of America-based writer Avijit Roy and blogger Washiqur Rahman last month for “criticising Islam”.

Taslima, if Indian intelligence agencies are to be believed, may very well be their next target. 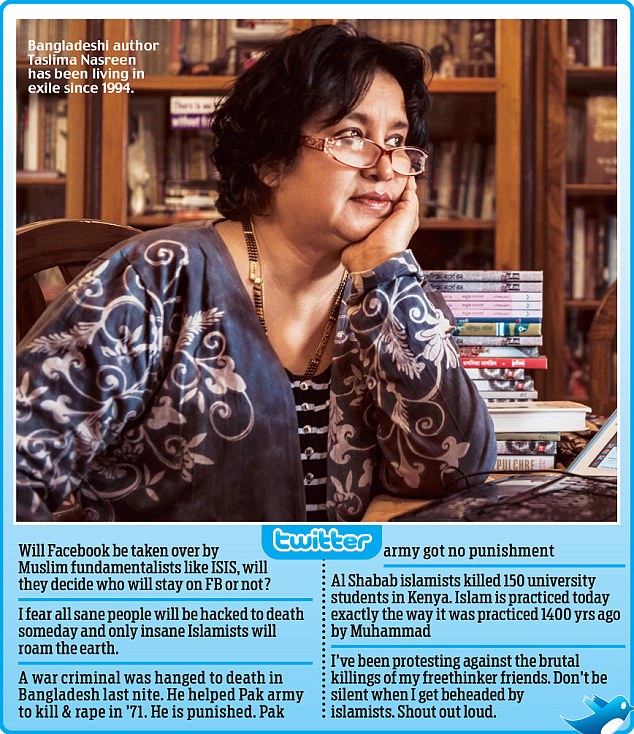 “Members of the Ansarullah Bangla Team are so brazen that they post online hate messages before they attack,” says Taslima.

“They had done that before killing Avijit and Washiqur and now they are posting hate messages targeting me. It is scary. But as long as I live, I will not be silenced.”

One of the reasons why Washiqur was attacked was for wishing Taslima on her birthday. On his Facebook page, Rahman also reposted a cartoon depicting Prophet Mohammed from French satire magazine Charlie Hebdo.

“Washiqur’s murderers are madrasa students. They were brainwashed by the Ansarullah Bangla Team. They were ordered by their madrasa teacher to kill Washiqur,” says 52- year-old Taslima

“I am not surprised when I hear freethinkers are getting murdered in Bangladesh.”

They have reportedly confessed that members of the Ansarullah Bengali Team are infiltrating into India with a plan to assassinate Taslima in Delhi.

I’m glad she’s out of there.

For the toolbox » « Mezon, who hopes to be a journalist one day