The Cannes Film Festival is reportedly not allowing women into screenings if they’re wearing flat shoes.

Into screenings. It would be bad enough if it were the Top Gala Codfish Ball, but it’s screenings. People go to screenings as part of their work, as well as for entertainment and enlightenment. The Cannes Film Festival is a professional event as well as social and festive and so on.

And then there’s the issue of what high heels are, which is a form of temporary and comparatively mild foot-binding. The bones aren’t actually broken as they are in footbinding (although high heels can easily cause broken bones in the feet and anywhere else, because they’re highly unstable – that’s the whole point of them), but they are pinched and bent.

A few days ago I saw a pair of woman-man couples cross the street on their way to a wedding in a local park. The street there is pocked and lumpy, as city streets so often are. Both women looked all but disabled by the task – their posture was hunched and distorted as they picked each step carefully in their towering heels. The men of course were just walking in a normal confident manner. It creeps me out that this is just normal. I think most people consider foot-binding (if they’re aware of it) grotesque and deeply misogynist, yet high heels are a close relative of foot-binding but they’re seen as normal…and in Cannes, actively mandated.

Flatgate erupted on Twitter this week after several women were apparently turned away from a red carpet screening of Cate Blanchett’s new movie Carol because they were in the demon flats. According to Screen Daily, the screening was on a Sunday night and the women weren’t exactly wearing Keds:

Multiple guests, some older with medical conditions, were denied access to the anticipated world-premiere screening for wearing rhinestone flats.

The festival declined to comment on the matter, but did confirm that it is obligatory for all women to wear high-heels to red-carpet screenings.

That’s just sick. High heels are a body-deforming article of clothing, just as tight corsets are. Nobody should be making them obligatory for anyone.

And as Village Voice film critic Stephanie Zacharek notes, heels are always red carpet-appropriate (Full disclosure: Zacharek is a friend and former coworker, and possibly the most stylish woman in journalism).

Stephanie Zacharek ‏@szacharek
So let me get this straight: I could wear these on the red carpet at Cannes… (1/2) 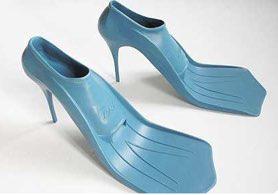 But not a gorgeous pair of Manolo Blahnik flats she shows next.

I have to say though, I would love to see someone wear those.

(And then take them off and wear a gorgeous pair of flats.)

Guest post: I can tell a story about a concerned, caring Earl » « Hussain Jawad