A Facebook friend posted a link to my Freethinker column (published yesterday), and got some…lively comments.

The idea was to be cunts to Muslims on the grounds of they were subhuman mongrels who should get the fuck out of Denmark.

Paul McEnery Nobody’s using cartoonists for scapegoats. YOU personally are pretending that the Danish cartoons weren’t full on racialist hate speech intended to provoke violence. So is Benson.

Nice deflect by pointlessly objecting to “cunts” as if it matters, btw. We’ve been through that before, and you were completely provincial and wrong then too. And I did it again just to show that you’ll take offence at pointless and provincial things while deliberately overlooking the substantial matter. 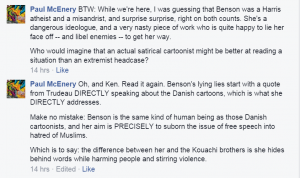 Paul McEnery BTW: While we’re here, I was guessing that Benson was a Harris atheist and a misandrist, and surprise surprise, right on both counts. She’s a dangerous ideologue, and a very nasty piece of work who is quite happy to lie her face off — and libel enemies — to get her way.

Who would imagine that an actual satirical cartoonist might be better at reading a situation than an extremist headcase?

Paul McEnery Oh, and Ken. Read it again. Benson’s lying lies start with a quote from Trudeau DIRECTLY speaking about the Danish cartoons, which is what she DIRECTLY addresses.

Make no mistake: Benson is the same kind of human being as those Danish cartoonists, and her aim is PRECISELY to suborn the issue of free speech into hatred of Muslims.

Which is to say: the difference between her and the Kouachi brothers is she hides behind words while harming people and stirring violence.

Paul McEnery And while we’re here, her actual issue with Trudeau is that he calls out Western bigots and hate speechers for their part in perpetuating the cycle of violence.

Which would include her.

He is concerned about the security risk for delegates » « Guest post: There is no one answer for all patients