It’s been a couple of weeks since the posting of a clarification of my reasons for leaving the Humanist Society of South Australia (HSSA). This, in response to public speculation by HSSA member Mark Senior, was a labour that could have been more easily avoided if only the HSSA had kept its members properly informed of policies passed by committee.

Apparently it needs pointing out that I’m not obliged to use private channels with the HSSA when making corrective statements, when HSSA members publicly speculate on my reasons for leaving. As you’d expect, people will complain of improper treatment all the same…

“My current opinion of Bruce has diminished greatly. He acts more like a rightwing witch-hunter than a progressive thinker and spends an inordinate amount of his time looking for fault in others in the progressive movements.

When we were at the Global Atheist Conference and we met PZ Meyers [sic] he came away saying leadingly “DID YOU SEE HIS EYES?”…”WHAT?”, I responded. He said, “HE WAS LOOKING AT ALL THE TEENAGE GIRLS!”. I didn’t see that at all. Maybe I wasn’t hunting for it like Bruce was. He came away suggesting PZ was an old pervert, I came away thinking it was nice to have met him. Name any public figure in the atheist or Progressive side of politics and he will have a similar attack vector.

This tendency removes him from almost any social environment as people start to fear the inevitable moment when he will turn on them (something I have heard from quite a few members).

If you look at this post you’ll see that it is without basis. “weird body language”, “secrets” that were announced at public meetings and discussed and ACCEPTED after he ceased attending. Accusations of racism to allusions to cultural practices & ideas (a formal logical fallacy), “rape apologetics” for a case where both woman involved have overtly said no rape occurred (we also don’t pre-convict people), liking one self-effacing page out of 1000’s that I have hit like on (keep hunting Bruce, I’m sure you’ll find something else to assist in the assassination) and “whiffs” of problems.

This tall poppy syndrome, combined with his willingness to not voice any of this TO OUR FACES (while taking lifts to meetings, etc) and giving every appearance of being a friend is not a good look.

I will go through his public backstab in detail on the site… which will no doubt be longer than his actual post… a waste of my time in dealing with one big load of innuendo.”
(Justin Millikan, HSSA President, 2015)

Let me home in on one point, before I address a few of the others.

The HSSA President dismisses the accusations on the basis of claims that have been considered by pretty much everyone even vaguely familiar with the case. Perhaps he’d like to enlighten everyone concerned as to why the point he raises obligates that the accusations against Assange be dismissed. Perhaps the President can explain why failing to dismiss the allegations against Assange constitutes “pre-convicting”.

And perhaps, until both the President and Secretary have reached alignment with Leslie Cannold’s views on this matter – a matter that could have had her leaving the Wikileaks party earlier than she did – they could reconsider their habit of histrionically dropping her name on account of an AHoY award she won in 2011, before the current HSSA even existed.

I started this post as I started the last – pointing out that the President and Secretary had kept members in the dark about the passing of the anti-harassment policy earlier in 2014. In his response to my initial post, The President has claimed that I was wrong, and that the policy had been announced at a public meeting that I had not attended.

The falsity of this assertion was quickly pointed out by HSSA member Scott Sharrad, who attended all of last year’s meetings. The anti-harassment policy was not announced publicly. I’ve told the truth on this matter; the President has not.

Perhaps HSSA members would like to take this opportunity to demand of committee, an explanation as to why the rules of the HSSA have also been kept from the membership. It’s not for no reason that members of other Humanist bodies are often given copies of the organisation’s constitution. I know I got mine when I defected to an interstate Humanist organisation.

Apparently my penchant for a certain “attack vector” removes me from almost any social environment because of the fear “quite a few” people have of my turning on them – so members tell Justin. Apparently, I also give “every appearance of being a friend” – so says Justin.

This kind of overt self-contradiction is what you’ll find when people make things up as they go along.

The first of these two contradictory claims is absurd just on its own merits given that I was not “removed” from the HSSA. I resigned of my own cognisance.

As for my not voicing any of the complaints I made to people’s faces; this is flatly untrue.  No, I didn’t raise each and every point to the President or Secretary’s face, nor did I put any of it to the floor at meetings.

However, when in person, I raised the issue of a racist joke about a Thai restaurant with the President, the response I got was a dismissive “HA HA! THAT’S NOT RACIST!” When I raised this issue again in my formal resignation from committee, I got evasion and excuses.

There’s only a limited extent to which I’m willing to be direct or formal with certain people, when such approaches fail to ablate even the tiniest fraction of the tin-foil lining bonded to their skulls.

If the President genuinely believes that I have never been direct with him about any of this, in person, then either he’s entirely gormless, incredibly forgetful, or both. Of course, there’s also the possibility that he doesn’t genuinely believe this.

My objection to the President’s classism has been taken by certain members as nit-picking, and signifying nothing. Yet the President’s own response demonstrates this dismissive attitude isn’t a feasible position. First of all, he volunteers the opinion that the page is just “self-effacing”. 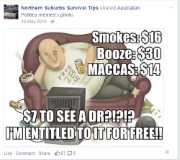 This particular meme, featured on the Northern Suburbs Survival Tips page, refers to the $7 Medicare Co-payment that the Abbott Government had planned in 2014. This policy would have hit pensioners and the unemployed, and particularly those with chronic illnesses, quite hard. According to the HSSA President though, this is just a self-effacing joke. (You can follow the link to see more examples of just how “self-effacing” the page really is).

Inviting poor folk to ‘like’ this page is one thing, but volunteering the opinion that the page is innocuous is an entirely different prospect.

Far more tellingly though, is the President’s complaint of being the victim of “tall poppy syndrome”. Aside from the vain absurdity of the President positioning himself as a “tall poppy”, this rhetorical trope is used regularly – as it is here – to vilify, and to dismiss the objections and concerns of poor people out of hand. It’s a concept that’s intrinsically classist.

Rather than rebutting my original objection, the President has gormlessly affirmed its truth.

“Assassination”, “witch-hunter”, “PZ Meyers [sic]” – veterans in dealing with the kind of rubbish the HSSA President is peddling will recognise the red flags immediately.

Let me lay a few facts on you about my time at the 2012 Global Atheist Convention (GAC).

Between my covering the GAC for Butterflies and Wheels, my desire to meet people I met on Facebook, and my utter not-giving-a-shit-about-celebrity, the only direct celebrity interactions I had involved someone I’d rather forget, a mutual nod with Dan Dennett, and Richard Dawkins possibly staring in the direction of my table. I don’t count being in the same hall as PZ as meeting him, and at any rate, I’ve never seen him around teenagers, nor do I recall teenagers being at the GAC in the first place.

The HSSA President’s account of my time at the GAC is about as credible as any of his other tall tales.

The President says he’s going to respond at length; good; good for me; good for HSSA members who genuinely want to know what they’re dealing with; good for CAHS; not so good for the President, nor the Secretary, nor for the cultish types who’ve lined up to brown nose in the wake of all of this.

Continuing my dispute with this ultracrepidarian bumbler would be unproductive. I’ve had more than enough of this issue, and of the HSSA, and I trust in the President’s capacity to continue inadvertently verifying my account, while undermining his own.