Update 2: People kept pointing out that “my bad” isn’t an apology, which is true, but honestly I didn’t and don’t see much point in apologizing here. It would be crass and revolting to do it on Twitter. I don’t know Sommers personally so I don’t have her email address. But then a way of finding one occurred to me, and I did find it, so I apologized to her directly.

Update: Oops. I didn’t realize Sommers’s husband just died, so these are notes and flowers sent to the bereaved.

Although…honestly…it’s a little sickening that she uses #Gamergate to thank her new pals. More than a little. But still, if I’d known that’s what the flowers were for I wouldn’t have posted.

Christina Hoff Sommers is congratulating herself on playing a part in #GamerGate. 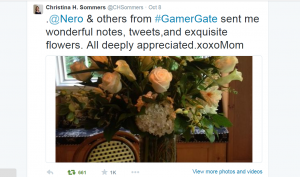 @Nero is an associate editor at Breitbart. Here’s what Anita Sarkeesian thinks of #GamerGate:

Feminist Frequency ‏@femfreq 18 hours ago
#GamerGate is best described as a sexist temper-tantrum targeting women, feminists, and allies working for change in the games industry.

A number of op-ed pieces critical of gaming culture were published in the wake of the new wave of harassment against Quinn. These pieces heralded the “end” of the “gamer” identity, in the sense that video games have become mainstream in recent years, and their audience expanded, trying to move on from and distance themselves from the gaming enthusiast (and primarily male) audience that gaming media traditionally catered to.[8][9][10][11] Many gamers aware of the controversy reacted negatively to these articles, accusing the gaming journalists of perpetuating harmful stereotypes of gamers as misogynistic white males or even going as far as seeing it as another example of “corruption” in video game journalism. Some of them expressed disappointment at the gaming journalists and other people surrounding the controversy for othering and distancing themselves from gaming enthusiasts instead of being pro-consumer and fostering progressive dialogue.[12] Either way these articles only ended up feeding the Gamergate movement and the controversy surrounding it.

Several commentators of conservative and libertarian persuasions chose to throw their support behind the Gamergate controversy. Christina Hoff Sommers of the conservative think tank the American Enterprise Institutereleased a video on YouTube which dismissed the existence of sexism in games and gaming culture.[13]Milo Yiannopoulos wrote a piece for Breitbart decrying the “feminist bullies” he alleges are “tearing the video game industry apart.”[14] The piece is arguably an example of cynical opportunism, as he tweeted “If you’re a grown man with hands clamped to an Xbox controller instead of a pair of tits you need a good slap” just days before its publication,[15] and bemoaned the level of “sex, drugs and violence” in video games in a piece in The Kernel in 2013.[16]

Various largely interchangeable conspiracy theories are in circulation within the blogosphere about what Gamergate is really about and what the media don’t want you to know about it, most of them involving terms like “corruption and collusion” and clichés about “social justice warriors“, along with dog whistle nonsense about “cultural Marxism“, “social engineering” and “mind control”.[17]

I keep saying…Sommers used to be an academic, a philosopher. Now she’s down in the muck with Breitbart hacks. It’s pathetic.